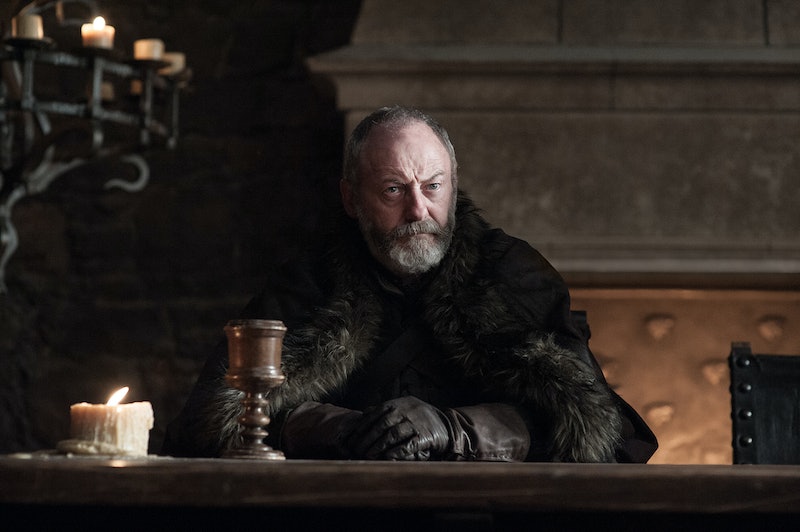 When it comes to dealing with a show like Game of Thrones, it's becoming more and more difficult to predict which way exactly the story is going to go. And now that the show is gearing up to air its eighth and final season this April, it basically goes without saying that none of these beloved Westeros characters are safe from harm. So when someone like Liam Cunningham teases that his Game of Thrones character Ser Davos could die, you better believe fans are going to take a remark like that pretty seriously.

During a recent appearance on Ireland's The Late, Late Show, the actor opened up about the highly anticipated final season and claimed that the remaining episodes will "make epic seem small." He also made clear why it's important for the series to end at this point in time and not go on for longer than it should. "This show isn’t going to be dragged out like other shows is because it’s incredibly difficult, you need the perfect storm," Cunningham explained. "The quality of the writing, you can’t make that a thing that just continues, it has to have a lifespan."

That's when the conversation took a rather grim turn as the actor discussed how lucky Davos has been thus far to have survived for so long on a show that's well known for killing off beloved characters. "So far, so far," Cunningham said in response. "That doesn’t mean anything. We’re all going to die. Don’t forget ‘valar morghulis’ which is one of the phrases on the show which means ‘all men must die.'”

Of course, it's important to note that, given the way Cunningham phrases this sentence, he was clearly trying to sound like he's simply making a general statement that everyone dies eventually in life. But it's possible he was also trying to tease fans about Davos' fate without giving anything away outright. Could this imply that this loyal knight will meet a tragic end by the time Season 8 comes to a close? It's something that fans should certainly not rule out entirely.

Obviously, it seems unlikely that every single person on the show will die by the time those final credits start to roll. (Though if any show was going to do something like that, it would be Game of Thrones.) But it's safe to assume that there will be a decent amount of casualties throughout the last six episodes, whether it be at the hand of Cersei or during the upcoming battle against the White Walkers.

Davos is usually always by Jon Snow's side these days, and given the pivotal role the former Lord Commander of the Night's Watch will play, not only in the fight against the White Walker army, but in the claim to the Iron Throne, it could put Davos directly in harm's way. Davos is loyal to a fault when it comes to protecting the people he loves and cares about. It'd be easy to picture him sacrificing his own life in order to save Jon's. And given Cunningham's latest comments, that possibility seems more likely than ever.

Fans will just have to tune in this April to see if Davos' luck ends up running out.