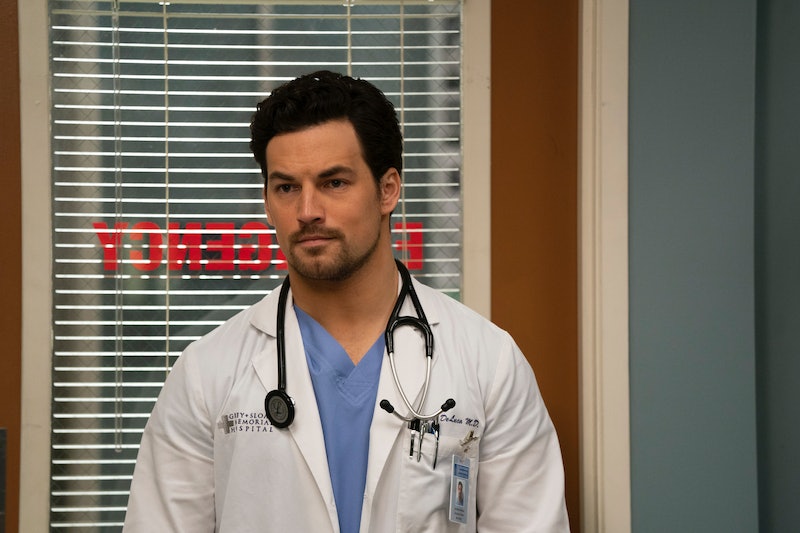 If fans were worried about Meredith's fate following her insurance fraud on Grey's Anatomy, they now need to worry about someone else instead. DeLuca could go to jail on Grey's Anatomy because he's trying to take the fall for Meredith. During Thursday's May 9 episode, the hospital's insurance company visited to meet with Bailey and Catherine Fox. They had discovered that one of Meredith's patients had been operated on under Meredith's daughter's name in order to provide better insurance to the patient. Bailey brought DeLuca in to the meeting to question him about the case, and he ended up falling on the sword.

Meredith actually acted alone when she put her daughter Ellis down on the insurance form. She was operating on a little girl who was in America under asylum and who didn't have insurance. Meredith didn't even stop to explore other options — she was likely acting emotionally because of how much the girl reminded her of Ellis. Meredith realized how her daughter had great healthcare simply because of the life she was born into, while this other little girl didn't simply because she'd been born in another country and had to flee it. So she acted in the only way she could think of in the moment. Now, DeLuca is paying for her act of humanity.

As soon as DeLuca realized in the meeting that they were targeting Meredith, he decided to take the fall for her. He "confessed" his actions to Meredith later while Catherine Fox stood by disapprovingly. "I wanted to apologize to you first before going to the police," DeLuca explained to a bewildered Meredith. He told her he had, without her knowledge, forged the insurance forms. "It's not fair to you and it's not fair to the kids," he said, clearly meaning that it wouldn't be fair to Meredith's family if she went to jail for this. DeLuca doesn't have a family to support, so he seemed reconciled with the fact that he'd be going to prison for Meredith. Insurance fraud is a felony in this case, and it will be hard for DeLuca to talk his way out of this one since he confessed.

But that's not Meredith's only problem. Bailey seems suspicious that DeLuca would have acted alone in this. In the preview for the upcoming episode, she asks Webber if he knows anything that would link DeLuca to another perpetrator — likely Meredith. The trailer also showed DeLuca being arrested. Now, do I think he will actually go to jail and stay in jail? No. This is a TV show, and time and time again its characters have escaped certain doom to bounce back just fine. Not long ago, Alex was facing jail time for assaulting none other than DeLuca. But he got out of that jam in the end, and DeLuca likely will too.

Perhaps Meredith won't let him take the fall and she'll confess to her actions. Maybe DeLuca will hire a kickass lawyer. Who knows, but jail isn't endgame for DeLuca. It just can't be. More likely, this plot is a device to show Meredith the depth of love DeLuca has for her. Last episode, DeLuca told Meredith he loved her, and she didn't say anything back because the last person she loved was Derek, and we all know how that ended up. DeLuca seems to want to show her that he'd do anything for her, and that she's safe with him because of it.

Meredith hasn't had the best luck in life or in love, but DeLuca is beyond a stand-up guy for being willing to go to prison for her. Hopefully he finds his way out of this mess so he and Meredith can be together again, and she can tell him she loves him back — because, come on, you know that deep down she does.