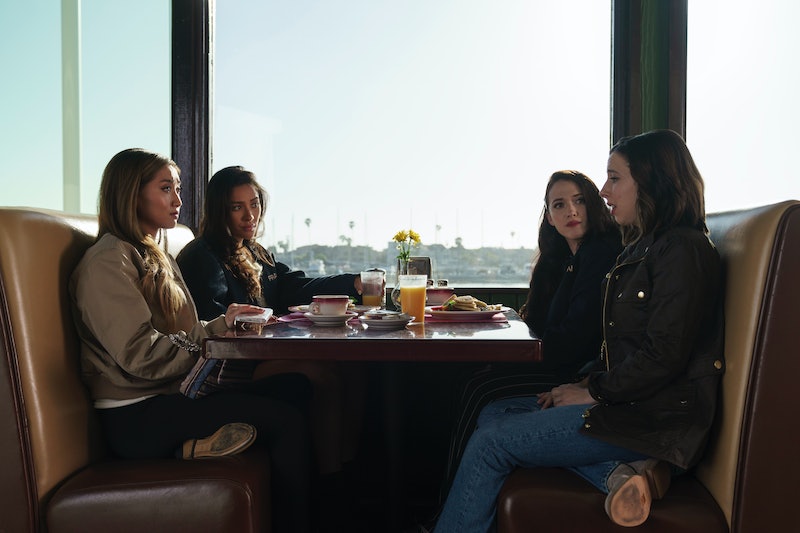 Jordan Weiss initially wrote the pilot for her new Hulu series, Dollface, as a resume sample. She hoped the story about female friendship would land her a job as a writer's assistan...but it ended up getting her a lot more. Now, it's a full, 10-episode season, and in an interview with Yahoo!'s BUILD series, she said she hopes that Dollface will return for Season 2, too.

When a fan from the show's studio audience asked Weiss about her future plans, she gave a long-winded answer. She said she's working on a second script for an Elizabeth Banks film, but she'll also "hopefully [be] getting to make lots more episodes of Dollface" in the near future.

A potential second season is a far cry from where the script started. According to Weiss, she showed it to an assistant friend who eventually got promoted to work on Margot Robbie's I, Tonya, and he then shared it with Robbie and her peers, who loved it.

In a world full of romantic comedies led by heteronormative couples, Weiss wanted Dollface's love story to focus on a group of friends. Main character Jules (Kat Dennings) is abruptly dumped five years into a relationship, leaving her to reconnect with the friends she unintentionally abandoned.

"It's hard to make friends as an adult," Weiss said in the interview with BUILD. "I feel like I've really had to hone my skills of hitting on friends ... there's a courtship process in friendship in the same way that there are in romantic relationships."

To that end, the show does explore female friendship, but not exclusively. "These stories we're telling are so relatable that you can throw the gender aspect out the window," Brenda Song, who plays Jules' friend Madison, told Variety in the same interview. "At the end of the day, the friendships are what drive the show, and these characters are so distinct and themselves that I think that people watching, whether they're male or female, can find qualities in each of these characters that they can relate to. So it doesn't matter if you're male or female — it's about friendship, and it's about life."

Hopefully, enough people will see themselves in the show that Hulu will green-light it for more.