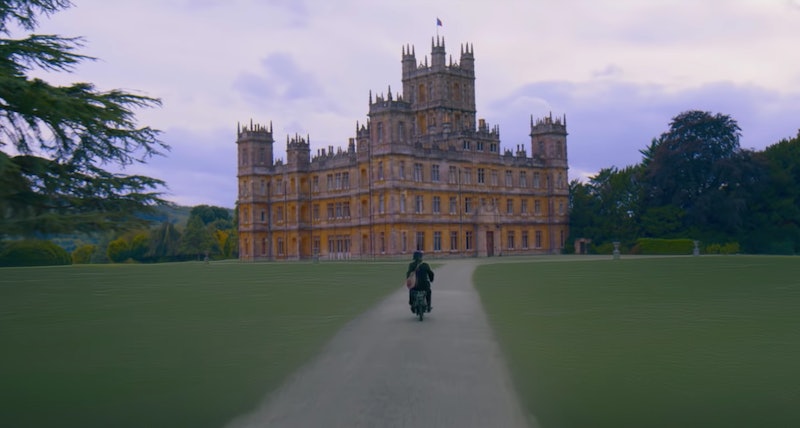 Ever since Downton Abbey began airing back in 2010, the show was an absolute hit. The costumes, the minding your p's and q's, the scandal, and all the love. No wonder viewers have been bereft since it ended. So, when the announcement of a Downton Abbey movie came about earlier this year, fans' prayers were answered, but the thing I'm wondering is: will Downton Abbey the movie follow on from the TV show's storyline? Because I need answers.

Well, according to some recent comments from actor Robert James-Collier, who plays Thomas Barrow in the TV show and now in the movie, it looks like it will.

In an interview with the Metro, James-Collier gave a few little tidbits of information about the upcoming movie.

Speaking about the process behind bringing the hit show into the cinema world, James-Collier explained to the newspaper:

"[W]ith shows like Sex And The City and The Inbetweeners having successful films, there was precedence there. Downton is an established brand now, so for me it was a bit of a no-brainer to do a film. And I’m glad they did. It ties up a lot of loose ends and I think there was a demand for it."

So, going by these comments, it looks like, yes, the movie will, at least in part, follow up on the show. And, even better than that, it'll tie up loose ends that left fans begging for more. I for one cannot wait.

Although the TV show's finale was well received, understandably a few questions remained. One of the main ones being: will Thomas ever find happiness? Thomas was a man embittered by his struggles with his own sexuality. His story really pulled at the heartstrings of those who do not fit the heteronormative mould. His self hatred and battle with his identity was a perfectly tragic portrayal of the lives of members of the LGBTQIA+ community in times past. However, the latest trailer for the film suggests that things may be changing for Thomas.

Yes, guys, they are giving Thomas a love interest that might well actually be a success! Speaking to the Metro, James-Collier revealed that, in the film, his character heads off on his very own adventure. Apparently, we're going to get a deeper look into James-Collier's character and his development. When pressed regarding the potential new romance, the actor explained how complicated things are going to get:

"Yes, he does [find romance]. He's sort of a film within a film. Mr Carson is brought back to help when the royal family visit the abbey and Thomas sees it as a slight of his abilities so he stands himself down for the duration of their visit and goes off and has an adventure. So it was strange because I was back with everyone for parts of it but for big parts I was on my own filming up in Bradford. It was like I was doing a Thomas Barrow special, which I think everyone wants to see!"

So, what about everyone else at the Downton Abbey estate?

Well, according to the Radio Times, the movie "will be set in 1927 (a year on from the TV series’ finale) with the Great Depression looming and the Crawleys tightening their belts with their once large bevy of servants now diminished."

The Radio Times reveals that Carson the butler will "come out of retirement to try to restore glory to Downton, and Lady Mary will consider leaving the estate forever. However, luckily Anna Bates is on hand to attempt to convince her ladyship to stay."

They continue: "Meanwhile, Branson gets a new love interest, Mrs Patmore defends the honour of her kitchen from a royal invasion, and the Dowager Countess attempts to bend the knee."

So, needless to say, it looks like things are going to get pretty lit.

As the film fast approaches, more and more clues regarding the storyline are emerging. And it looks like there are some interesting new angles being added to the storyline, as well as a return to some we already know.

As is revealed in the movie's trailer, this version of Downton will include a visit from the actual King and Queen. Holy moly, they had better get the place in tip top shape for it. Could you imagine the dusting?

Well you won't have to imagine for too much longer as the film will hit a cinema near you on September 13.