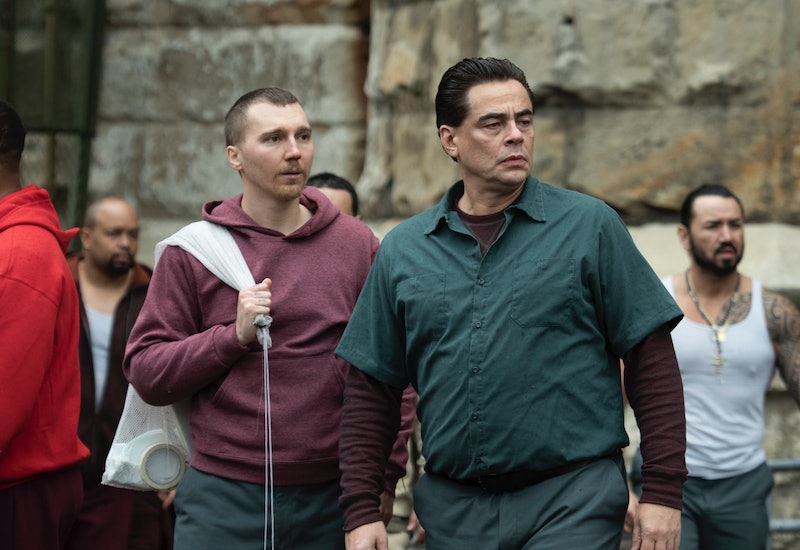 Unfortunately for those who are enthralled by the true story dramatized by the Showtime limited series Escape at Dannemora, the show probably won't return for Season 2. It hasn't actually been canceled, per se, but it's always been billed as a miniseries, and as the story it's following has a pretty concrete conclusion, a second batch of episodes was probably never in the cards.

According to TVSeriesFinale.com, the show's ratings "weren't very good," but they've been climbing. And though there's a possibility for the network to bring it back with new characters and a new story, the site said Dannemora is probably done after its first finale.

The two main characters of the story are either dead or currently in prison, so there really aren't any developments a second season could cover, regardless of Dannemora's ratings. Benicio Del Toro's Richard Matt was shot and killed following the escape the show has spent its season detailing, and Paul Dano's real-life counterpart David Sweat is still serving his initial life sentence with no possibility of parole for a murder conviction. Joyce Mitchell, played in the series by Patricia Arquette, is also still serving a seven-year sentence for assisting Matt and Sweat.

It seems unlikely that the series would try to continue on and diverge from the original subject matter, which is what it would need to do should it not wrap with Season 1. And according to some critics, Escape at Dannemora's storytelling is already stretching its longevity to the max with its current episodes.

The Atlantic's Sophie Gilbert praised director Ben Stiller's craft, as well as the dark humor and "tense, thoughtful, slightly surreal drama" featured in the show's finale. But she also asks a pivotal question — if this final episode, which exceeds 90 minutes, is so perfect, were the ones that came before it needed? "Are they necessary? Is this a TV series or an almost eight-hour movie?" Gilbert writes, later adding that the show "takes a glacial approach to storytelling, as if its characters need thawing out before they can get to work."

The New York Times' Mike Hale raised similar concerns about the show's pacing, suggesting that it's better suited to a binge-watch than to tuning in week after week. "In a seven-hour session, the series takes on an epic quality, keeping you interested on a narrative level at least; week to week, the individual episodes won’t necessarily deliver enough to make you want to come back," he wrote. "Dannemora, like the escape it portrays, is a meticulously planned and executed operation that doesn’t go anywhere."

Variety's Daniel D'Addario wrote that "the story falls short of urgent relevance, and it didn’t need to be told over seven hours," while the The Hollywood Reporter's Tim Goodman said "the overwhelming slowness has become a major deterrent" before the show deigns to tell the full story about the main characters late in the season.

All these reviews note high points found within the show, too — there seems to be no questioning the care and skill that has gone into making Dannemora. But there's a widespread belief that perhaps the story could have been told more concisely in fewer hours and been just as effective, if not more. There has been no reason given by Showtime or anyone involved in Dannemora for viewers to expect a second season given its initially limited nature, and given the issues raised with even a single season's pacing, it likely won't make the choice to outstay its welcome.