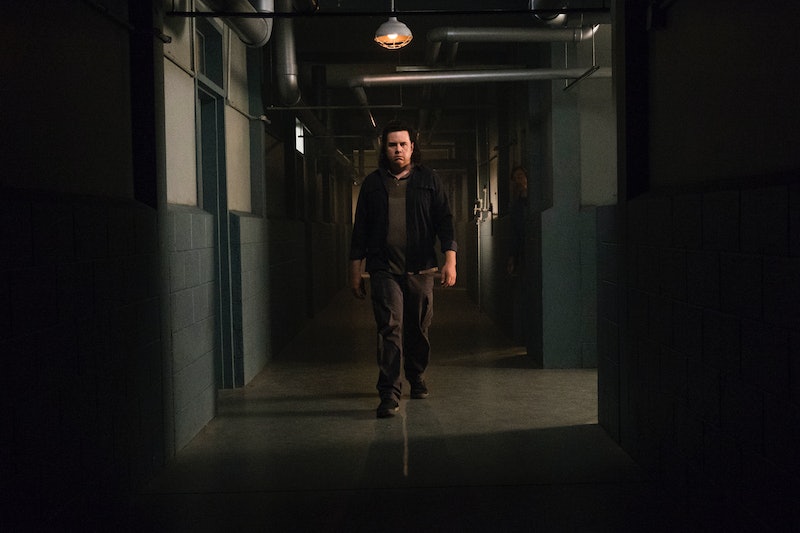 How many chances can The Walking Dead give Eugene? Ever since Negan and the Saviors kidnapped him he has fallen further and further down the rabbit hole to the Dark Side — which is mixing metaphors, but totally appropriate for the folksy villain. Will Eugene die on The Walking Dead? Can he? Fans are beyond ready for him to be over.

Last time we saw Eugene, Father Gabriel was urging him to help break Dr. Carson out and take him back to the Hilltop so that he could continue treating Maggie. He continues this plea in the Sunday, December 3 episode, but apparently that's not going to happen. He easily discovers that Dwight is the mole working with "Team AHK," also known as Alexandria, Hilltop, and the Kingdom and threatens to expose him if he continues to betray the Saviors.

The fact that Eugene builds a party drone to lure away the hoard of walkers with music is so cool, but how can one celebrate his engineering victory? He has fully committed to Negan. He refers to Rick, Daryl, Rosita, and all of his old friends as "former travel companions" only. He's only out for himself and he knows it. When Daryl and Tara breach the Sanctuary and allow the hoard in, Eugene cracks. He goes to Gabriel and between the scene that unfolds there and his previous interactions with Dwight, makes it perfectly clear that he doesn't care what happens to our heroes as long as he gets to live.

Eugene may be funny to listen to, with his down-home Shakespearean way of speaking. But the charm is wearing thin. Sure, at the end of the episode, Eugene doesn't rat out the traitors in the midst of the Sanctuary. Sure, he seems haunted by the hand he played in Sasha's suicide. Sure, he cries and gets his Wine Wednesday on during some much needed alone time. But does he deserve a redemption arc at this point? It seems like the only way out for him, morally, is to sacrifice his own life.

Overall, way too much weighs on Eugene's shoulders. He knows too much about all of the parties at play. He is a major asset who prioritizes his own self-preservation over everything. No wonder Negan wants to keep him close. He actually promotes him to right hand man and everything. That said, Lucille's owner may be his only fan. Dwight is over him. Father Gabriel is over him. Negan's wives are over her. You know who else is over him? The fans. Twitter is chock full of fans ready to him to go. Is it cruel for fans to call for a character's death? Maybe, but Eugene's actions are not exactly helping.

OK fine, some people are still rooting for Eugene — if only so that he doesn't continue to betray our faves.

You can only forgive a character so many times.

This is another ridiculous moment that fans latched onto. Way to read the room, Eugene. Negan is so not the hand kissing type.

We're all over him.

It is ridiculous, and they can't.

Eugene has never truly been a hero. He weaseled his way onto Rosita and Abraham's team with a lie about knowing how to cure the virus that caused this zombie apocalypse. While he has had some shining moments, he has always been a ruthless and spineless survivor. Maybe Gabriel, another infamous coward on The Walking Dead, can be the one to kill him. That would be immensely satisfying, and after everything that Eugene has put the survivors though, a perfect end to his twisted journey.