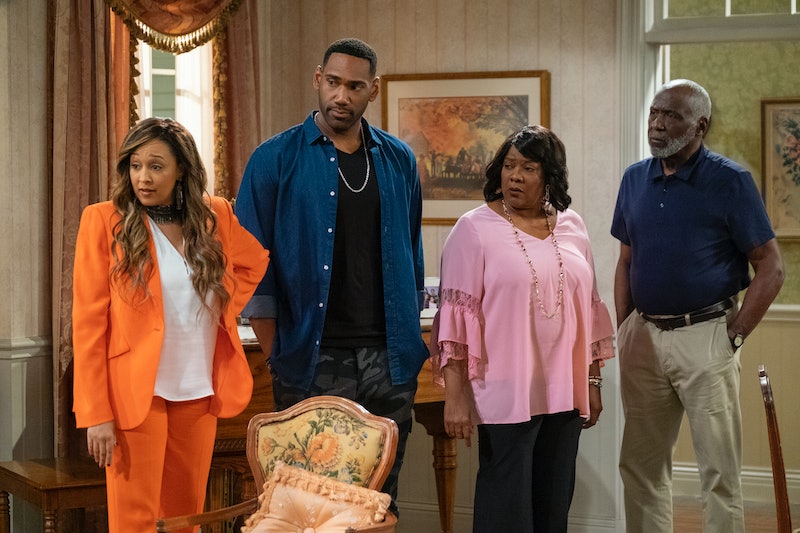 Netflix's new sitcom Family Reunion, streaming July 10, is all about the ups, downs, and life lessons that come with an extended family all living under the same roof. With a classic but funny premise like that, it seems like there'd be plenty of hijinks to explore in a Family Reunion Season 2. For now, though, the freshman series is focused on finding its footing.

Per Yahoo, Family Reunion stars Tia Mowry-Hardrict as Cocoa McKellan, a fun Seattle resident who raises her children in an "unconventional" way. Her new-age ideals become a point of contention when she moves with her husband, former football star Moz (Anthony Alabi), and their four children to his small hometown in Georgia to live with her old school, church-going mother-in-law M'Dear (Loretta Devine). And, according to Mowry-Hardrict, her Sister, Sister mom Jackée Harry will make an appearance on the show as well, so be prepared to have some nostalgic feels.

It's certainly not the first time that this type of story has been told, but Family Reunion has an all-Black cast and writers room, which should make it feel like an authentic portrayal of a multi-generational Black family — something TV certainly could use more of.

The Family Reunion trailer doesn't reveal why the McKellans decide to uproot from the city and move to the country, but it's more focused on Black family magic than any of the particulars. In the trailer, the entire McKellan clan stands together family picture-style as M'Dear says that everyone coming home is Black family magic. In another scene, Cocoa jokes she needs to learn the look her mother-in-law gives the kids to get them to be quiet when they groan about studying. Of course, M'Dear replies that it's a "gift" that comes with many years of parenting.

Then, each family member talks about how Black magic manifests in their lives – sticking together, praying together, doing things with some attitude, snapping peas on the porch, and M'Dear's sweet potato pie. There are several shots of everyone interacting in funny ways, including the oldest McKellan daughter pretending to not know her mother and chatting with her grandma about technology.

Meanwhile, a stunned granddad walks in on his son wearing only a towel, fixing a toilet, and dancing with his wife in the bathroom before things get really awkward. The trailer ends with the everyone smiling and doing the "McKellan Slide" together at the family reunion. Based on the show's name, the family gathering might have been the reason why they came in the first place and decided to settle in Georgia to start a new life. Overall, it's a fun teaser clip that suggests this show could be a great way to escape the world for a few solid laughs.

So, be patient: there may not be news yet about a Family Reunion Season 2, but it will come eventually. In the meantime, just savor what the first season brings: lighthearted jokes, life lessons, and an authentic representation of an endearing Black family.