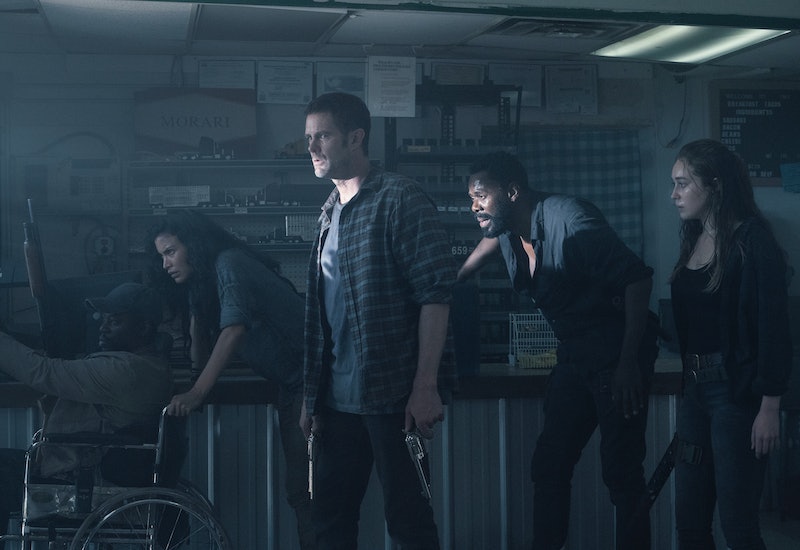 After a season full of loss, Fear The Walking Dead Season 4 is coming to an end Sunday. Grab a cold one to toast the end of a wild ride that brought some eccentric survivors together and introduced villains even Negan wouldn't want to face. Luckily, Fear The Walking Dead has been renewed for Season 5, so any new alliances or threats will stumble on in this apocalypse.

It's hard to imagine the show going on without Madison — the death of the group's leader in the middle of Season 4 (or, technically, the beginning, as her death was revealed in flashbacks) was a major blow to the characters and the series itself. It's going to take at least another season for these characters to fully move on and start again without her. Even the new characters Al, June, John, and especially Sarah and Wendell haven't really had time to integrate themselves into the group.

Morgan Jones from The Walking Dead has stepped in as a potential new leader in Season 4, and barring a tragedy that would have fans up in arms all over the franchise, he'll be around in Season 5 as well. In a way, he's a perfect fit for the lost souls of Fear. Morgan came from a community on The Walking Dead that was always trying to stay together. They're warriors, and even the "indoor cats" like Carol and Daryl isolate themselves only when they feel as though they're caring too much for their companions. Fear The Walking Dead is a different story.

On Fear The Walking Dead, especially by the time Morgan arrives, everybody wants to be alone. Al just wanted to document without interfering. Strand, Alicia, and Luciana wanted to forget what happened to them when they were in a group. Charlie wanted to atone for what she'd done. June wanted to escape who she thought she was, and John just wanted to wait for someone to find him. That all changed, ironically thanks to to the franchise's most anti-social character of all, Morgan. If and when this group decides to be together and stay together, their dynamic will make for an interesting story.

When will Season 5 premiere? Look for new episodes in late Spring/early Summer 2019. The seasons, which have been split into two distinct arcs for the past couple of years, tend to start off in April or June, ending towards the end of September or start of October — just in time for new seasons of The Walking Dead to take back the reigns. It's like a relay race, only with prestige zombie programming instead of batons.

Whether the group starts off on the road to Alexandria with Morgan, ends up in a war with another group, or gives it all up to brew beer in Season 5, more is coming. Remember when Fear The Walking Dead took place on a boat, and they were up against wet zombies and post-apocalyptic pirates? What if they did that again? Whatever happens, especially after Sunday's Season 4 finale, this group is better off together and are off to more adventures in 2019.