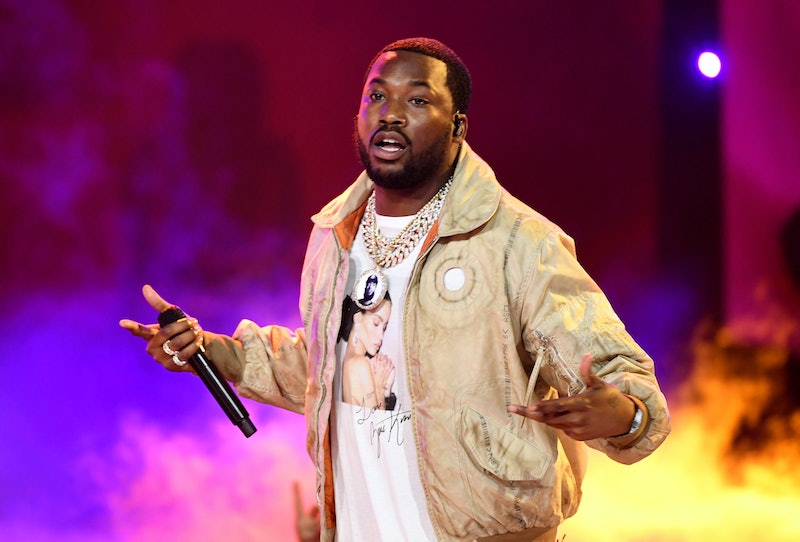 Amazon's Free Meek covers a lot of ground: Meek Mill's rough Philadelphia upbringing, his rise to fame, the unique challenges of growing up — and trying to be successful — as a black man in America. The core of the docuseries, though, is his ongoing legal battle. So while it's possible Free Meek could return for Season 2, the future of the series is kind of dependent on what happens with Meek's case.

The rapper, who is now 32, has been facing consequences related to the same charges for well over a decade now. As outlined by CBS Philadelphia, he was initially charged for drug possession, firearms violations, and simple assault in 2008 and later sentenced to 11 to 23 months in prison and seven years of probation. After serving five months, he was released. However, in 2014, he was found to be in violation of his parole for failing to report to his probation officer and for unauthorized travel plans. He went back to jail for another five months and was given an additional five years of probation. Then in 2017, a judge sentenced him to two to four years in prison for violating probation, citing a failed drug test, violation of travel restrictions, and two arrests outside of Philadelphia. He was released in April 2018 following widespread backlash and protests from fans.

Free Meek retraces most of these details, but one update came just a few weeks before to the show's premiere. As the Los Angeles Times reports, on July 24, three Pennsylvania judges vacated Meek's 2008 conviction due to credibility concerns about the arresting officer. They also removed Judge Genece E. Brinkley, who'd been overseeing Meek's case since 2008, and overturned her parole violation findings, which had sent Meek back to prison in 2017.

But while this development marks a significant step in what has been a lengthy legal struggle for Meek, he still has a long way to go. NBC Philadelphia reported that though the Philadelphia District Attorney's Office was expected to make a decision regarding whether Meek would be granted a retrial for his 2008 conviction or if the case would be thrown out altogether in early August, the office has postponed the decision until Aug. 27.

"While we had hoped that this matter would end today, we remain confident that justice will prevail in Meek's case once and for all," Mill's attorney Joe Tacopina said in a statement of the postponement, per NBC.

So, with all of that said, it's certainly possible that Free Meek will return for a second season. Though Judge Brinkley, who's a central focus in the show, has since been removed from the case, there have already been several additional details the docuseries won't be able to cover — and there will likely be more come Aug. 27. Even if the new judge throws out his case, a second season could document how Meek's legal saga finally came to an end. And if there's a retrial, well, then there will definitely be more story left to tell.

More like this
Dr. Anna Pou Is Still Practicing Medicine After Facing Murder Charges
By Brad Witter
The 'Black Bird' Stars Are Both Heading Back To Apple TV+
By Brad Witter
'The Capture' Is Finally Back – & S2 Looks Tense AF
By Sophie McEvoy and El Hunt
'Children of the Underground' Subject Faye Yager Now Runs A North Carolina B&B
By Brad Witter
Get Even More From Bustle — Sign Up For The Newsletter