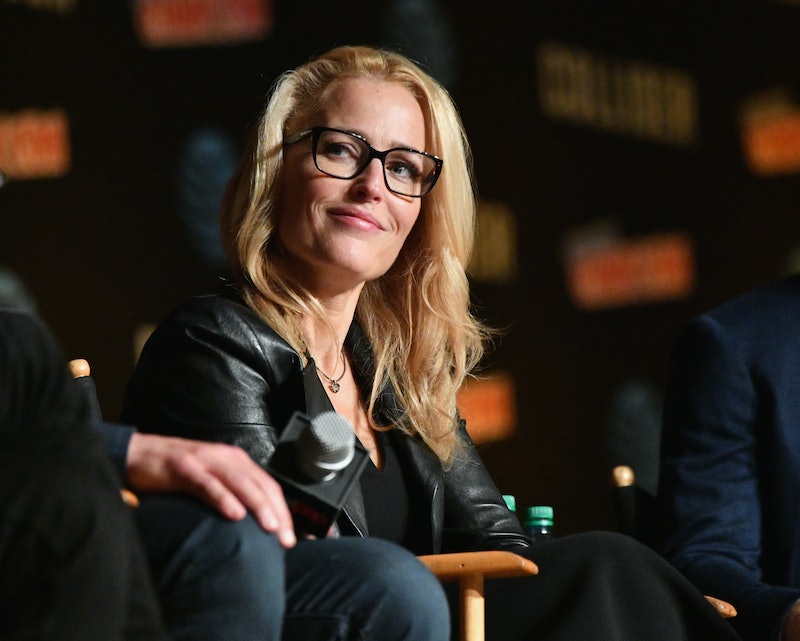 American Gods is full of fantastical and confounding figures, but there may not have been a single God as inspired and interesting as Media. Whether she was presenting herself as Lucille Ball, Marilyn Monroe, or David Bowie, Media was a looming figure over the entire season that showed the true power of the New Gods. However, fans hoping that they would see actress Gillian Anderson return for American Gods Season 2 will soon discover that there's a new Media in town — and its name is New Media. See what they did there?

American Gods saw some significant shake-ups in the nearly two-year gap between Season 1 first aired on Starz. After the departure of showrunners Bryan Fuller and Michael Green after Season 1, a few cast members left the series alongside them, including Kristin Chenoweth, who played the role of Easter, and Gillian Anderson. Both of these actresses had worked with Fuller in the past, Chenoweth on Pushing Daisies and Gillian Anderson on Hannibal, suggesting that a large part of their interest in the show came from Fuller's specific vision. While Anderson is out, the role of Media hasn't been scrubbed from American Gods. Instead, Media has evolved into something that is more relevant in today's fast-moving world full of infinite sources of content extending forever — and its name is New Media.

New Media is described by Starz as "the goddess of global content — and in this age, a cyberspace chameleon, who is also a master of manipulation," per a report by The A.V. Club. It's a worthy update to the character, whose origin as a sitcom-aping specter of classic Hollywood and pop music icons of the mid-20th century feels a tad outdated in the world of Instagram and TikTok. If anything the force of Media is more all-encompassing than is was when the original American Gods novel was first published in 2001.

With the new character comes a new actress, with Shameless actress Kahyun Kim taking the role. While the television show has made some noticable differences from the book, such as giving characters like Laura and Mad Sweeney more involved roles, changing the character of Media could have some major implications in the series, as the New God is one of the novel's most powerful villains. Another question that arises is that of what form New Media will take. Will she been seen harnessing her power from Twitter memes? Does she have a Twitch stream? What failure of hers or her subjects allowed Vine to die?

While communication moved fairly quickly in the 20th century, it pales in comparison to the advent of the internet, social media, and smartphones. The character of New Media reflects the world that American Gods is airing within — but it is a shame that fans didn't get another season of Anderson cosplaying as some of pop culture's biggest icons — or, possibly, being forced to join the Old Gods seeing as the God of Radio is old news compared to the God of Fortnite or whatever figures will be populating the new season of Gods.