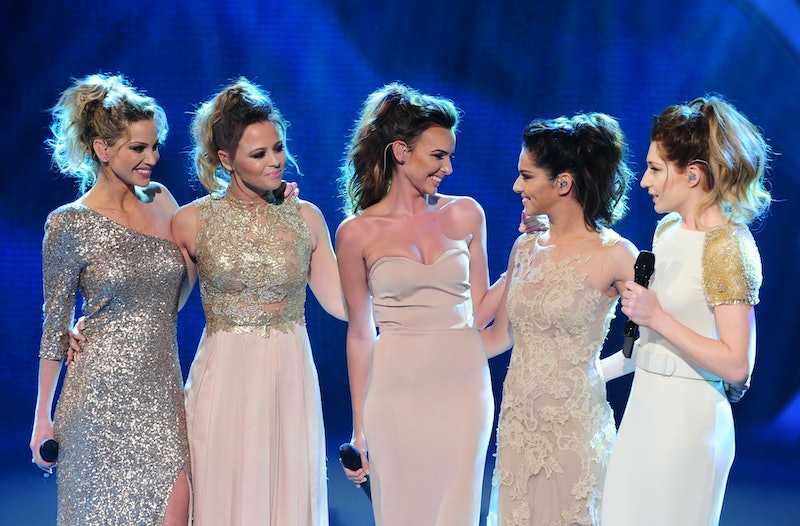 The UK loves a good reunion, especially when it comes to music. The Spice Girls have got back together several times, much to our enjoyment, and it seems that Girls Aloud might be following in their footsteps. The girls are just two years away from their 20th anniversary, winning ITV's Popstars: The Rivals back in 2002, and rumours have started to circulate already. So, will Girls Aloud reunite in 2020?

Speaking on Angela Scanlon's Thanks A Million podcast, Nadine Coyle confirmed the girls have been talking about doing something. "There's been loads of conversations and people now are getting in contact, like, 'What do we do?' It's still really early."

"I'm 34-years-old, so to think that I've been doing anything for 20 years is shocking, isn't it?" the singer added.

While Cheryl Cole and Sarah Harding haven't spoken publicly about a potential reunion, Kimberly Walsh recently alluded to the possibility when speaking to The Sun about bumping into Coyle. "I saw Nadine the other day in London and it was so nice to catch up with her. It's been a while," she said. "We just bumped into each other at an event. It made me feel nostalgic."

When it comes to Girls Aloud getting back together, Walsh suggested it'll come down to scheduling. "Everybody is busy at the moment, but I have a lot of love for all the girls. I'm proud of them," she said.

"All the songs feel like a distant memory, but if I hear them then I think they're good," Walsh continued. "Our outfits were racy, but we were girls' girls and about looking glamorous and having something to aspire to."

Nicola Roberts has also said she's up for a reunion with her bandmates. "I would love to get back with the girls and us put on a show, and just put it on for the fans really," she said on ITV's This Morning, after winning The Masked Singer in February this year. "I think that we just have to cross that bridge when the anniversary comes and see where we all are."

Although nothing has been confirmed yet, we wouldn't be surprised to see the girls on tour again – they celebrated their 10th anniversary in 2012 with a UK-wide tour and greatest hits album. While we wait for further announcement, we'll have it on repeat.