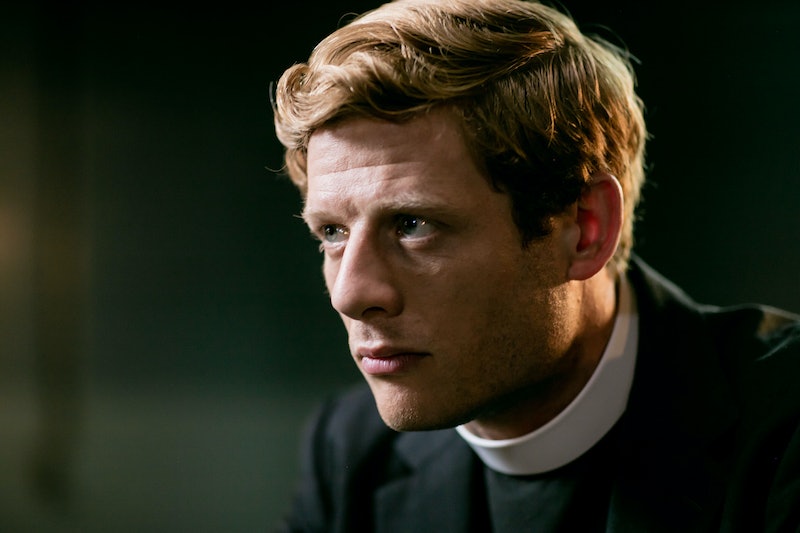 Grantchester — the ITV drama that sees a clergyman turned investigator looking for answers concerning his murdered parishman — has returned with a new season and a new vicar. Season four of the show, which premiered on ITV1 on Jan. 11, saw the beloved James Norton replaced with the equally hunky Tom Brittney, who took on the role of Reverend Will Davenport. It's certainly brought a new dynamic to the show, but how will it play out from here? With all of these change ups, I want to know, will Grantchester return for season five?

Without beating around the bush, the prospect of Grantchester season five is looking incredibly likely. In an interview with Metro ahead of the season four premiere, new guy on the block Brittney revealed that Grantchester's showrunners "definitely want[ed] to go again," before adding: "I think this is a show that could keep going on forever in a way."

Season four has served up as much drama as always, and has gone off without a hitch despite the kerfuffle that came before it aired. In an interview with Metro back in December, actor Robson Green, who plays Geordie Keating, revealed that he had actually thought about leaving the show alongside his co-star Norton:

"Yeah, we [Robson Green and James Norton] had a chat because we got the recommission [for season four] and there was a load of American money coming in," Green said. "[Norton] said, 'I’ll only do it if you do it,' and vice versa and he said he wanted to leave. I said okay. They [the producers] said 'if you both leave then we can’t do the series, so one of you have to stay and we’ll give you incentives to stay.'"

Speaking about his decision to stay, Green told Metro: "It was the writing and being part of something that is enjoyable and going to be worthwhile. I think this [season four] is the best series."

Although Grantchester season five is yet to be officially confirmed by ITV, the seasons have been airing at a pretty regular rate so far, so, if I had to hazard a guess, I'd expect it to come out around January, 2020. But that's just one writer's opinion.

I've emailed one of the show's reps to see if I can squeeze any more info out of them. I'll update you if I hear anything.

Until then, you've still got a bit of time to see how this season will play out, with the finale is set to air on ITV1 at 9 p.m. on Friday, Feb. 15. Per the Radio Times' summary, the last episode of season four is set to see Will wrapped up in Geordie's world, "where a curious case unfolds concerning the murder of a Teddy Boy at a dance hall."

It all sounds very intriguing, but if you're in need of a quick catch up before the finale airs, you can do so by taking yourself to the ITV Hub, where all previous episodes have been made available. Enjoy!