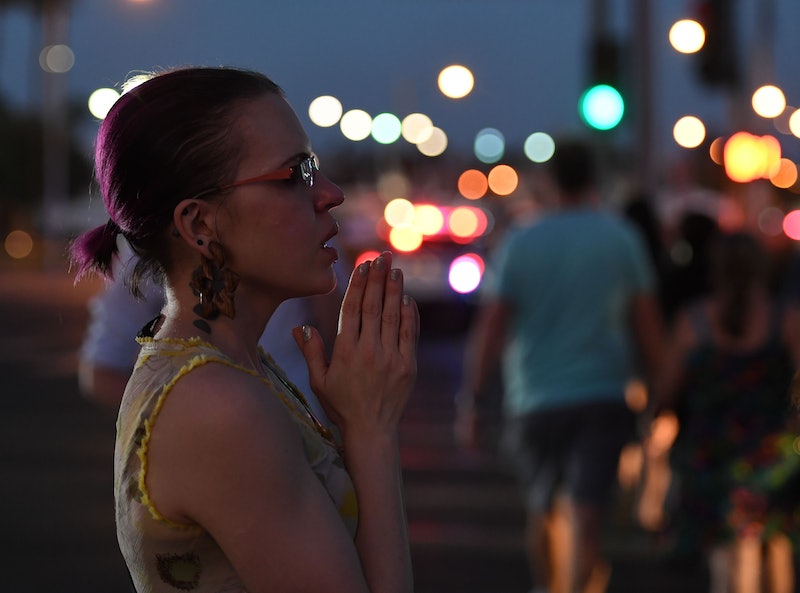 There is no consensus in Washington, D.C., to do anything after the Las Vegas Strip mass shooting that killed 59 people. And that shouldn't come as much surprise given who is in control of Congress and the White House. Trump was endorsed by the NRA, as were many of his Republican colleagues. So even though a majority of Americans support stricter gun controls, they're not likely to act. And as time passes after a shooting, support for government action usually wanes. Therefore the only way to ensure gun laws change is to stay angry.

That's right. Instead of letting the conversation move on, you need to stay mad, and keep engaged on the issue, even in between terrible tragedies like the one in Vegas. There was a big push again after the Pulse shooting last year, but when it failed, most Americans moved on. Because the natural tendency is to move on after a time and society turns its attention elsewhere, Congress knows it will eventually be let off the hook.

CNN reports that "support for stricter gun laws tends to spike in the immediate aftermath of mass shootings." According to their polls, it's highest at times like this, right after a shooting. Following Pulse, 55 percent of Americans were in favor of more gun control. The year before it was just 46 percent. If you look at Gallup, this is an ongoing trend. Right after the Sandy Hook shooting, support was at 58 percent.

If politicians were willing to take action at a time like this, when support is at its highest, there might be some hope. But Republicans seem to be taking the opposite tactic. You'll hear a similar thing from both Trump and GOP leaders in Congress: that now is the time to wait, not take action. "We’ll be talking about gun laws as time goes on," Trump told reporters on his way to Puerto Rico.

Senate Majority Leader Mitch McConnell was even more eager to stress that argument. "The investigation has not even been completed. I think it's premature to be discussing legislative solutions, if there are any," he said on Capitol Hill Tuesday. "It's particularly inappropriate to politicize an event like this. It just happened within the last day and half. Entirely premature to be discussing about legislative solutions if any."

That is much more than what House Speaker Paul Ryan tried to do, who completely ignored the topic all together. Asked about gun laws, Ryan said, "Right now, we are focused on passing our budget." That means even a debate on the issues is off the table, for now.

He went on to say, "It’s important that as we see the dust settle and we see what was behind some of these tragedies, that mental health reform is a critical ingredient to making sure that we can try and prevent some of these things from happening in the past.” Previously, Ryan pushed a plan that would have cut health care, including mental health coverage, for millions of Americans.

The Republican plan is to let "the dust settle" "as time goes on," which is essentially waiting until Americans forget about the issue. The media is also in part to blame. The attention wanes as days pass following a mass shooting, and they begin to find new topics of conversation to keep readers and viewers engaged.

Democrats will try to push some form of reform. “We cannot banish evil or madness from the earth. But we must do what is within our power to make our country a safer place to live. We need common-sense reforms," Sen. Minority Leader Chuck Schumer said on Tuesday. But Democrats can't do much of anything without their Republican colleagues. Here's where you can come in. Stay mad, and let Congress know about it.