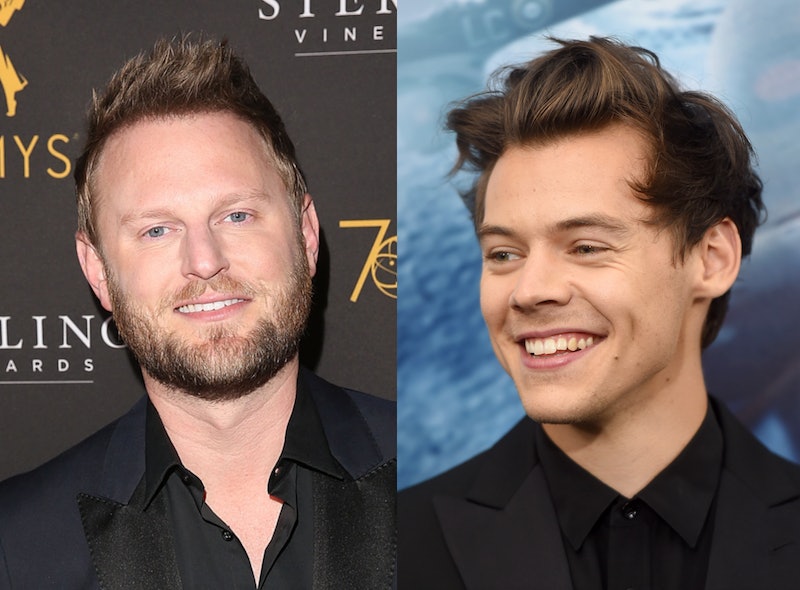 Watching the cast of Queer Eye interact with each other, both on screen and off, is one of the most delightful things in the world right now. Antoni Porowski, Karamo Brown, Bobby Berk, Tan France, and Jonathan Van Ness have made themselves household names, becoming the kings of feel-good-TV in the span of less than a year, and it's not stopping. And, after the group was spotted hanging out with a certain former One Direction member, now fans are wondering if Harry Styles will be on Queer Eye with the Fab Five. Good news for fans of both Queer Eye and Styles, the odds are looking good.

On Jan. 23, Deadline reported that the Fab Five was in Japan for a Netflix mini-series special called Queer Eye: We’re In Japan! According to Deadline, it'll be four episodes long, which is half of a regular, eight episode season. Berk posted a photo from Tokyo on Instagram a day after the news broke, as did Jonathan Van Ness. The report stated that the mini season will include the Fab Five meeting with "four Japanese men and women from different backgrounds and cultures who were selected from a wide group of applicants and nominations," as well as meeting with a fan.

Aside from spreading their usual awesome advice and joy, the Queer Eye guys were also rumored to welcome a major celebrity guest in upcoming new episodes, which could mean that Styles really will show up on the Japan Queer Eye special. In an interview with Entertainment Tonight, Van Ness teased that they would welcome the "biggest of the big of the big of the big of the most major earth-moving, earth-shattering cameos" in coming episodes. Could Harry Styles be it? You'll have to wait and see when the special Japan-themed series comes out in 2019. But, as fans await confirmation one way or the other, there's a lot of information to be gleaned from recent Instagram posts.

Based on their recent Instagram posts and stories, the Queer Eye guys are all still in Japan, which is where they met up with Styles to share a wild night out — and hopefully a day of filming. It's not certain why Harry Styles is in Japan, but he's been there since the New Year, so at least a month-long stay so far. He was also seen singing to "Smells Like Teen Spirit" with a live band in the country on Jan. 13, in "2019" glasses. In other words, it's not all that surprising to see that Styles met up with Berk and Brown in Japan. It is, however, very intriguing.

The proof fans have of the blessed encounter was posted to Berk's Instagram stories. In the videos shared on Feb. 1, Berk, Brown, and Styles can be seen enjoying a night out at karaoke. Unfortunately, the stories disappear after 24 hours, but screenshots and screen recorded videos last forever. And, thanks to photos and video picked up by fans, you can watch Berk and Styles belted out some serious tunes like Whitney Houston's "I Have Nothing" and Queen's "Bohemian Rhapsody."

Brown also got in on the fun on the night out in a bar, as seen in another video shared by Twitter user @JIMlNSGUK. It's unclear where the video originated, though based on the camera angle and opening shot of Brown and Berk, it was likely also posted to Berk's Instagram stories.

Also spotted in the many video updates from the fun night out was Kiko Mizuhara, a Korean-Japanese-American model and actor rumored to be dating Styles.

Queer Eye creator David Collins said that the new mini-season is a great way for the Fab Five to spread "self-care and compassion that the world needs now more than ever.” He told Deadline: “Filming in Japan is a wonderful opportunity for us to work with four deserving heroes that will help showcase the incredible traditions and customs of their country.” And, by the looks of it, it also provided a great opportunity for the Queer Eye stars to meet the one and only Styles. Hopefully fans will get to see what kind of wisdom the musician gives them when Queer Eye returns.