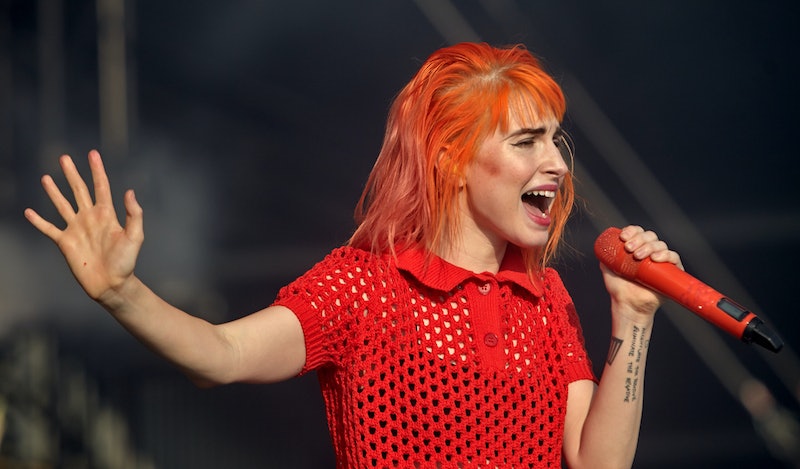 Dust off your favourite emo garms and sweep your fringe to one side, Hayley Williams is releasing solo music and it's time to become obsessed with her incredible vocal range once again. Considering new tunes are on the way, we're all wondering, will Hayley Williams tour the UK in 2020 to promote the new stuff?

I have reached out to her Williams' PR here in London for any relevant information and will let you know as soon as I've heard anything. However, looking at her social media accounts and website, nothing has been announced regarding upcoming tours in the UK or otherwise. Which might be a bit of a bummer for fans but at least there's the promise of brand spanking new music to keep them happy in the meantime.

At the end of 2019, following her birthday, the Tennessee native with a big voice took to her Twitter account to thank followers for their kind wishes. Not content with showing gratitude via a simple cheers, the singer also revealed that 2020 would be a pretty huge year for her. The singer announced she would be releasing solo music, writing: "I made something I'm going to call my own." Since that tweet, it was revealed that the first track she'll be releasing, Simmer, will be out on Jan. 22.

Williams has previously featured as a solo artist on Airplanes with B.O.B. and Stay The Night with Zedd. Simmer will be her first endeavour totally on her own and fans are more than ready.

Now, before everyone starts panicking, I should say: Paramore are still very much together, despite not making any new music together for a while. They released their fifth album After Laughter back in 2017, which was a return to form following Williams' brief departure from the band. Williams spoke to Fader in 2017 about why she left the group, explaining that she was giving herself time to look after her mental health and take stock of what she wanted to do with her life. "I just was done," she said. "I thought, There's gotta be something else that I'm good at in my life. Maybe it's time for me to go find that."

Williams' new solo work is sure to be a welcome addition to the lives of Paramore fans old and new. Just try not to crack any mirrors attempting the high notes.