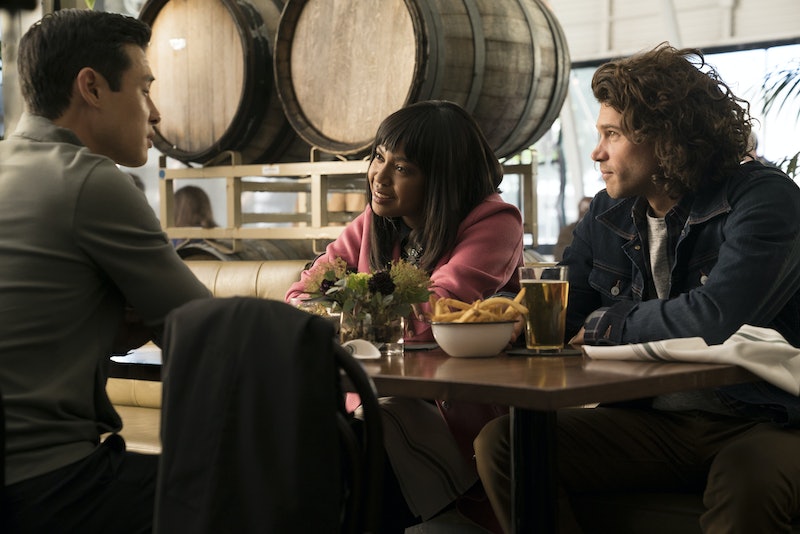 Oscar-winning writer Alan Ball (American Beauty), whom you might also remember as the creator of Six Feet Under and True Blood, has merged his knack for telling family dramas with his affinity for the supernatural in order to create HBO's latest family dramedy, Here and Now. The show premiered on Feb. 11, and is set to finish it's 10-episode run this Sunday, April 15. Until now, HBO hasn't officially commented one way or another on whether or not there will be another chapter in the story of the Bayer-Boatwright family. So, Will Here and Now return for Season 2?

All that potential for familial drama sounds like it would create enough conflict to fill up an hour-long show, but Here and Now doesn't stop there. It also features a Muslim family with an openly trans child. And then of course there's that supernatural element that comes into play when Ramon starts experiencing mysterious and confusing visions.

“When I sat down to write the pilot," Ball explained to Variety, "I didn’t want to write another show about another white family and their white problems. There’s nothing wrong with that. There’s been a lot of great shows on air that do that really, really well. But it wasn’t interesting enough to me.”

Of course, as a white male writer, Ball said he was also very conscientious about trying to bring diverse voices into the writers' room. In an interview with the New York Times, Ball revealed:

"[W]hen we — myself and my producing partner, Peter Macdissi — were putting the writers’ room together, we made sure that we had a couple of African-Americans, a guy of Asian descent, a Lebanese Muslim guy and a Palestinian gay guy. We have people who are adoptive parents. Growing up in my white privilege, I have no reason to know these things. So it’s not so much research on my part, it’s having these great writers that I work with who bring their own experiences to the table."

But did all of Ball's efforts to tell diverse American stories translate into a high-quality TV show with the potential to last for multiple seasons? Critics aren't so convinced. Benjamin Lee of the Guardian gave the show only two out of five stars, writing that it's allegedly "artlessly bludgeoning the viewer over the head with preachy liberalism despite the fact that they were probably onboard to begin with anyway."

Variety's Maureen Ryan also complained about the characters who set about tackling the show's important topics. "[If] only these thematic strands didn’t involve people who are mostly insufferable," she wrote.

Meanwhile, Tim Goodman of The Hollywood Reporter referred to it as "This is Us with sex" (which is pretty much all the convincing I need to tune in, TBH). But even he wrote that worried the show was just trying to do too much at once, and claimed it needed to allow for its characters to develop more completely.

Ball himself doesn't seem particularly bothered with whether or not people like the characters on his show. “People said American Beauty was filled with unlikable characters," he told the Guardian. "I’d actually be far more worried if people said they were bored or it was boring. But ‘unlikable’ — it really doesn’t bother me at all.”

Well, it's a good thing Ball isn't taking it too personally when people don't like his show — because, if the negative critical reception isn't enough to make HBO second guess their new show, the low viewership might just be the nail in the coffin. According to TVSeriesFinale.com, viewership for the Here and Now season premiere was .541 million people. That's pretty low, especially when you consider the series premiere of Six Feet Under attracted nearly five million viewers, and True Blood brought in a solid 1.44 million. Both Six Feet Under and True Blood saw a rise in overall viewership across the first season, while the already low viewership of Here and Now has dropped to just .36 million. If Ball wants to see his series continue, though, he might do well to give the audience time to learn to love his characters in a potential Season 2. A strong message of inclusivity and relatable family struggles are beautiful things, but they're not worth much if no one tunes in to watch.

More like this
Ava DuVernay Thought The 'Queen Sugar' Series Finale Felt “Really Satisfying”
By Brad Witter
Kit Connor Speaks Out On “Shocking” Lack Of Bisexual Representation
By Sam Ramsden
The 'Dead To Me' Creator Says Her Series Finale Idea “Felt Very True To The Show”
By Brad Witter
Will 'The Walking Dead' Return For Season 12?
By Grace Wehniainen
Get Even More From Bustle — Sign Up For The Newsletter