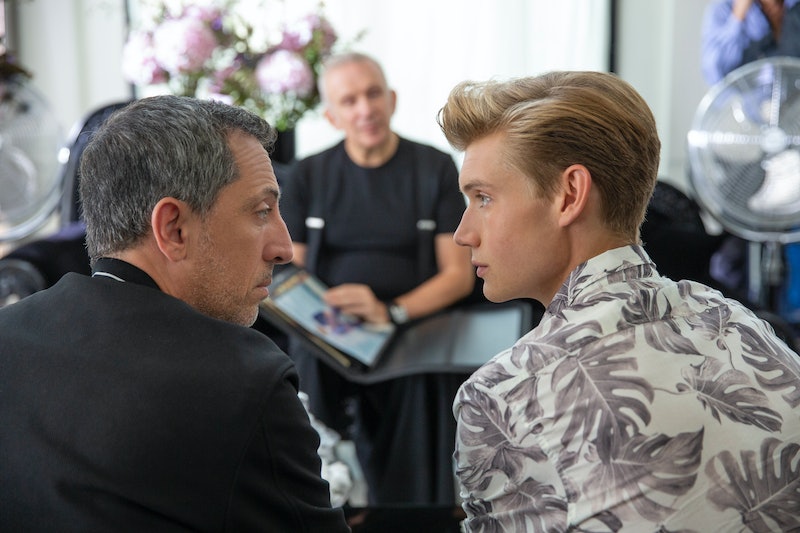 C'est Gad! In the same vein as semi-autobiographical shows like Seinfeld, Curb Your Enthusiasm, and Better Things, Netflix's Huge In France follows real-life comedian Gad Elmaleh as he realizes that fame doesn't always travel well. Much like the show's title suggests, Elmaleh is comedic royalty in his home country but isn't as well-known in the U.S., where he's moved to reunite with his teenage son. And while the series premieres Friday, April 12, it's too soon to tell if Huge In France will return for Season 2.

Although his 16-year-old model son, Luke (Jordan Ver Hoeve), refuses to connect with him, Gad decides to stick it out in Los Angeles, which is a far cry from his hometown of Paris. Thankfully, his trusty assistant Brian (Scott Keiji Takeda) helps him navigate the cultural complexities of America. But even though Brian wasn't David Spade's assistant so much as shadowed David Spade's assistant (his resume is full of asterisks), he seems to be doing a decent job, if the trailer is any indication. Huge In France also stars Erinn Hayes as Luke's mom, Vivian, and Matthew Del Negro as Luke's new father figure, Jason Alan Ross.

Huge In France is based loosely on Elmaleh's own life. Not only does he have an 18-year-old son who's a model, per the Hollywood Reporter, but in 2015, he performed stand-up in New York, which he said he bombed due to his broken English. But make no mistake — Elmaleh is fluent in French, Arabic, and Hebrew, per the same article, which is more languages than most Americans can claim. According to a 2016 interview the comedian did with Vanity Fair, Elmaleh was born in Casablanca, Morocco, attended high school in Quebec, then moved to Paris. His father was a mime, which inspired him to become a performer.

After his first disastrous set, Elmaleh worked on his English, and eventually nabbed appearances on talk shows like The Tonight Show Starring Jimmy Fallon and The Late Show with Stephen Colbert. "When you think France, maybe you think cheese or baguette," Elmaleh told THR. "In Europe, with talk shows, we immediately think Jimmy Fallon."

So although creating a sitcom in English proved to be a challenge, the comedian was game. "I always had a dream of America," Elmaleh told THR. "One day I said, 'I'm going to try to do this in English,' and my friends told me I was crazy. I love when someone tells me I'm crazy because then I know I'm onto something." Elmaleh already has two standup specials on Netflix — Gad Gone Wild, which he delivered in French to a Montreal crowd, and American Dream, which he performed in English, so this will be his third project for the streaming giant.

As for Netflix's long-term plans for the show, not much has been announced. Huge In France does have some star power behind it: Jarrad Paul and Andrew Mogel, who co-created The Grinder, co-created the series and serve as showrunners, per Deadline. And though Elmaleh may still be relatively unknown in America, he does have a fan base in his home country, and Huge in France could be his big break. "When Americans, who have no idea who I am, laugh at my jokes, it's exactly the same if someone loves you even if you're not rich and famous," he told Vanity Fair in the aforementioned interview. "Which is, of course, something I hope I never experience."

Ultimately, it will hinge upon how the show is received — both in America and abroad — but the cards seem to be stacked in Elmaleh's favor.

More like this
The ‘Love, Victor’ Showrunner Gave Fans Hope For A Possible Spinoff
By Brad Witter
Legacies Showrunner Said There Is Still Hope For More Vampire Diaries
By Gretchen Smail
Everything We Know About When To Expect The Rest Of The Upshaws Season 2
By Kadin Burnett
Everything We Know About Jerry Seinfeld's Pop-Tart Movie
By Radhika Menon
Get Even More From Bustle — Sign Up For The Newsletter