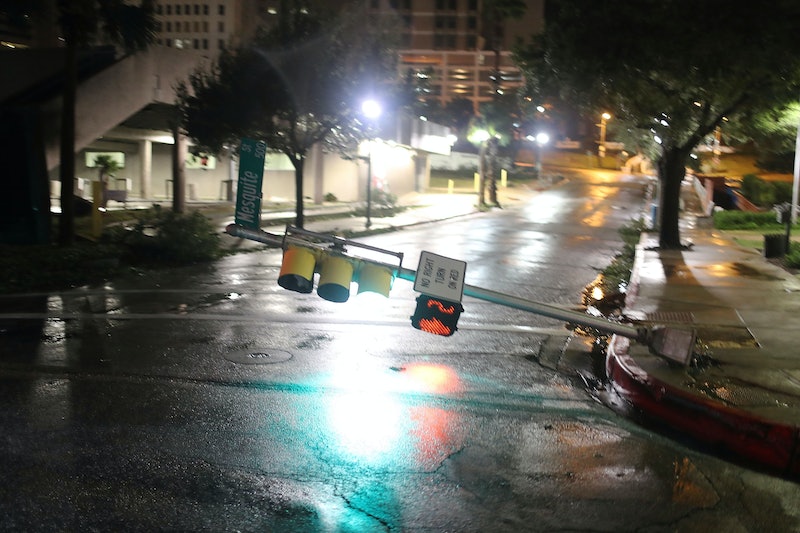 Texas was hit with the full force of Hurricane Harvey on Friday night as it made landfall on Corpus Christi as a Category 4 storm. Though it's slowed down since — Harvey was downgraded to a Category 1 hurricane on Saturday morning, with maximum wind speeds of 90 miles per hour — parts of Texas aren't in the clear just yet. But will Hurricane Harvey hit New Orleans? It's expected to potentially skirt Louisiana, but whether it's headed to the Big Easy could depend on how it develops in Texas.

Hurricane expert Bryan Norcross shared his thoughts on Hurricane Harvey possibly heading toward Louisiana while speaking on the Weather Channel and said that locals should be more concerned about the rain they may receive during the storm.

According to Norcross, while it is premature to predict anything for Louisiana at the moment, locals should remember that tracking the eye of the storm may not tell them much about what they may get in New Orleans.

"People in New Orleans need to quit looking at the center of the storm and feeling some sort of relief because it's in Texas. That doesn't mean it can't rain really, really hard elsewhere," Norcross explained.

While certain parts of Texas' coastline may witness up to 12 inches of rainfall, people in Louisiana may receive five to 10 inches in the next few days. According to weather forecasters, the downpour is expected to pick up intensity on Sunday or Monday while a state of emergency had been declared for Louisiana on Friday.

It is possible that some locals in Louisiana have assumed that Hurricane Harvey is Texas' headache alone but Gov. John Bel Edwards implored the people of the city to remain vigilant as the storm hits their neighboring state.

Edwards was joined by Lake Charles mayor Nic Hunter who told the press conference that folks in the western part of New Orleans should be paying special attention to the storm's developments since "we do expect to have some flooding here."

For New Orleans, the storm could take on a deadly face if it enters the state through the Gulf of Mexico. If the storm emerges from the Gulf, it could gain more intensity and bring a higher amount of downpour for the New Orleans, resulting in potentially life-threatening flooding.

In a statement to the public, Edwards guaranteed the locals of the city of the state's emergency and rescue operations and said, "I will continue to direct all of the necessary resources to preparing for the worst as we all pray for the best, but rest assured, state and local officials are working around the clock to monitor and respond to this potentially dangerous situation."

More like this
The Families Of Grenfell Tower Are Still Waiting For Justice, Five Years On
By Bustle UK
The Most Powerful Photos From The Weekend’s Abortion Rights Protests
By Melanie Mignucci
The 15 Best Dresses For Hot Weather
By Andrea Gale Boerem
13 Summer Solstice Quotes To Celebrate The Longest Day Of The Year
By Sadie Trombetta
Get Even More From Bustle — Sign Up For The Newsletter