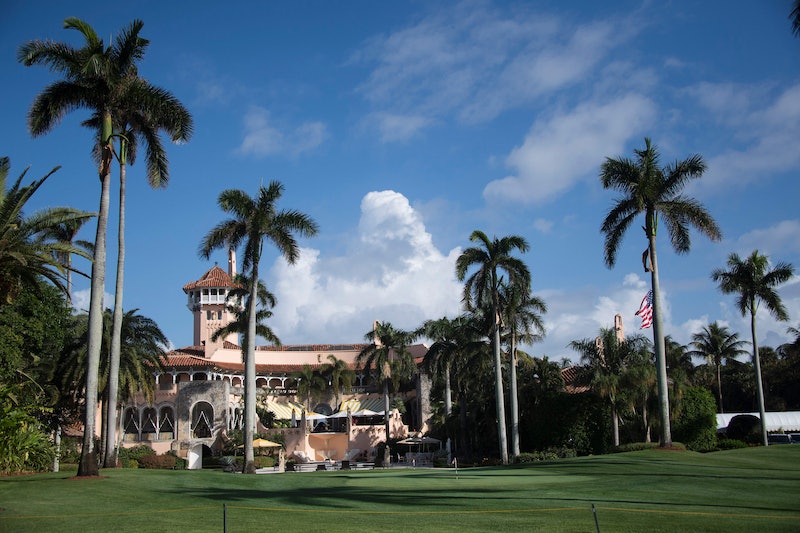 After having potentially damaged President Trump's 11-bedroom mansion in Saint Martin, it looks like Hurricane Irma might hit Mar-a-Lago, the president's beloved resort in Palm Beach. The National Hurricane Center's current projections show the storm making landfall near the property.

Irma, a Category 5 hurricane, made landfall in the small island of Barbuda early Wednesday morning and proceeded to hit Saint Martin and Puerto Rico later in the day. Massive damage and multiple fatalities have already been reported on the islands the storm has impacted.

How extensively Trump's mansion in Saint Martin may have been impacted has yet to be confirmed, but officials told The Washington Post that the side of the island his where his property is located suffered significant damages.

If Irma causes destruction on the Mar-a-Lago resort, it would no doubt come as terrible news for the president, who refers to the property as his Winter White House. "Writing my inaugural address at the Winter White House, Mar-a-Lago, three weeks ago," he tweeted in January.

In a February tweet, he gave it a similar but different nickname: "Will be having many meetings this weekend at The Southern White House," he wrote. Mar-a-Lago is also the president's second most-visited Trump property since his inauguration, second to Trump National Golf Club in Bedminster, New Jersey. He has so far spent 25 of his presidency days at the Palm Beach resort.

In addition to the resort, Irma could potentially hit other Trump-owned businesses. The Trump National Doral golf resort, located in Miami, tweeted a message on Wednesday stating that it was "monitoring" the hurricane and that activities would proceed normally "until further notice."

A Category 5 storm with sustained winds of over 185 mph, Hurricane Irma is one of the strongest storms to ever sweep across the Caribbean. Already, the small island of Barbuda is said to have been reduced to "total rubble" by the hurricane, according to Prime Minister Gaston Browne.