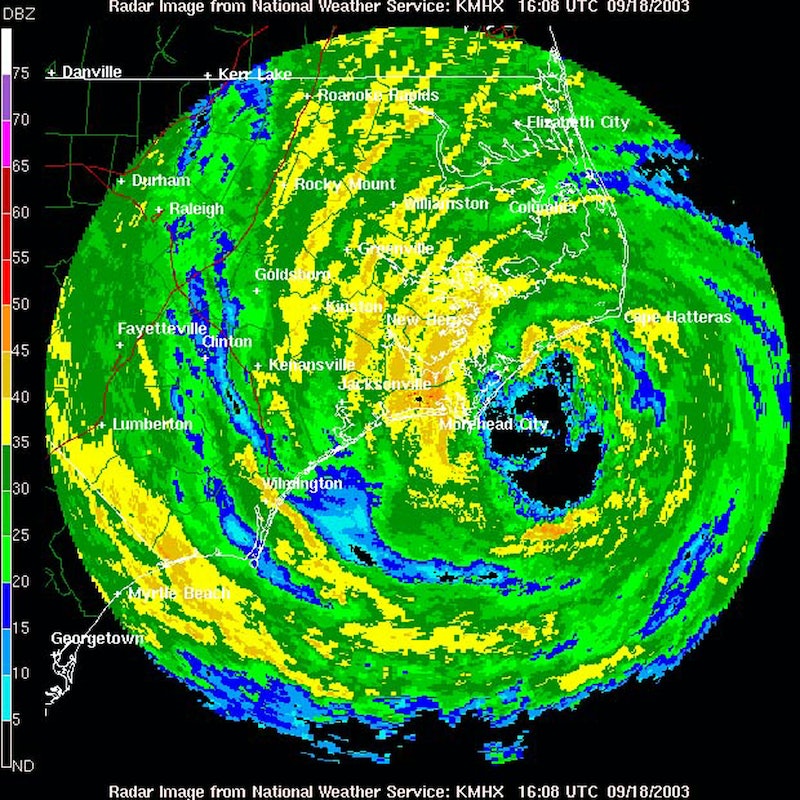 Just on the heels of Hurricane Harvey, another powerful storm is threatening the Atlantic this week. A troublingly powerful hurricane formed off the coast of Africa several days ago, and its slow trek across the ocean has struck fear in Americans who watched the destruction in Texas. Scientists are just now making timely predictions of the storm's path, and it looks like Hurricane Irma will hit Haiti, as well as possibly the East Coast of the United States.

Although the storm may still change course or fizzle out, weather forecasts can now reasonably predict that Irma will make landfall in Haiti. According to the National Hurricane Center, Irma will arrive in Haiti at approximately 8:00 a.m. on Sept. 7, but it may be an indirect hit. According to this chart by the NHC, Haiti will be spared the worst of the hurricane — wind speeds will top out around 30 to 40 miles per hour, unlike the 100+ mile per hour winds that battered the Texas Gulf coast when Harvey hit last week. For now, however, only Antigua, Barbuda, Montserrat, St. Kitts, Sint Maarten, St. Martin, and Saint Barthelemy have hurricane warnings posted.

It also appears that Irma will hit the east side of Florida at least, and possibly move north along the U.S. coast. The storm system was pointed almost directly due west, but looks like it will change trajectories and move toward the north by next weekend.

But Irma doesn't seem to be the intense superstorm that it was originally predicted to be. Most tropical storms stay weak until they get closer to the warmer waters of the Caribbean, but Irma strengthened to a Category 3 hurricane while still out in the middle of the Atlantic. Fears of a Category 5 storm making landfall in the U.S. abounded since everyone was already scared from Harvey. That early sign of strength was part of the reason people got attuned to Irma's existence so quickly, but the storm seems to have shown off all its tricks too early.

Haiti doesn't have a great track record with hurricanes, so if the island takes a direct hit, there could be even more humanitarian need by next weekend. Hurricane Harvey may cost more than $180 billion according to Texas governor Greg Abbott, which is already going to stretch the country's philanthropic capacities. If Haiti is in need of relief efforts after Irma, the global community may have to chip in to make up the difference, which hasn't happened so far with Harvey.

More like this
The 15 Best Dresses For Hot Weather
By Andrea Gale Boerem
13 Summer Solstice Quotes To Celebrate The Longest Day Of The Year
By Sadie Trombetta
The Summer Solstice Spiritual Meaning, Explained
By Jessica Booth and Brittany Beringer
For These Abortion Clinic Volunteers, Going TikTok Viral Is A Risk Worth Taking
By Audra Heinrichs
Get Even More From Bustle — Sign Up For The Newsletter