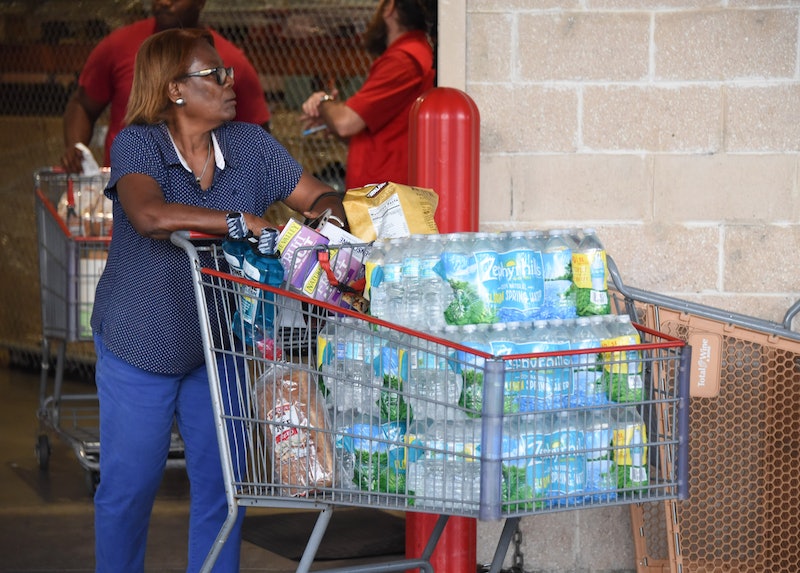 As Category 5 Hurricane Irma is headed for landfall, Caribbean islands and Southern Florida are preparing for the worst. But will Hurricane Irma hit Tallahassee? It's unclear if Florida's capital will feel Irma's wrath, but residents are still getting ready for the storm.

Irma is being touted as a "catastrophic" storm by weather experts. As it moved across the Atlantic on Tuesday, towards the Northeastern Caribbean, reports showed it sustained winds of 185 mph, gusts of up to 225 mph, and an enormous storm that is only moving at 15 mph. The storm is currently a Category 5, and is expected to stay in that range when it makes landfall on Tuesday. It is predicted to slow to a Category 4 storm as it approaches Cuba and Florida, though this rating is still considered to be "catastrophic."

Islands like Anguilla and Barbuda are expected to suffer tremendous damage as the initial landing ground for this storm. Islands to the west — from the British and U.S. Virgin Islands to Puerto Rico and Cuba — have all issued dire warnings and are focused on protecting its citizens in the coming days. Even the Florida Keys have begun to evacuate, and the state of Florida on Tuesday declared a state of emergency for all 67 counties in the state, which allows local governments to more easily prepare and respond to disasters.

But what about the more northern, further inland cities like Tallahassee? One might think that because Tallahassee isn't a seaside city — it sits about 22 miles from the gulf — it is safe from hurricane harm. But just because it's not coastal doesn't mean it hasn't been rocked by storms in the past.

Irma's path over the next few days is still somewhat unclear. The storm is expected to turn to the north when it hits just south of Florida, but what direction Irma takes from there is still unpredictable. The different forecasting models are showing variable paths for Irma to take: out to the east back over the Atlantic, or west up the Gulf of Mexico.

The most recent map tweeted about by the National Oceanic and Atmospheric Administration shows the path of the storm hitting the Tallahassee region around 8 p.m. EST on Saturday, but the same map only shows a 5-10 percent chance of sustained winds above 39 mph, which classifies a tropical storm.

Even early in the week, with the storm still days away, supermarkets and convenience stores were reporting shrinking supplies, as Tallahassee area residents flocked to stock up on essentials like water and batteries. People have reportedly already begun to stock up on gasoline as well, sparking fears that there may be temporary gas shortages in the area, especially with the supply affected by Hurricane Harvey's damage.

Irma's path through Florida is still uncertain, but residents of Tallahassee aren't taking any chances with this disastrous storm.