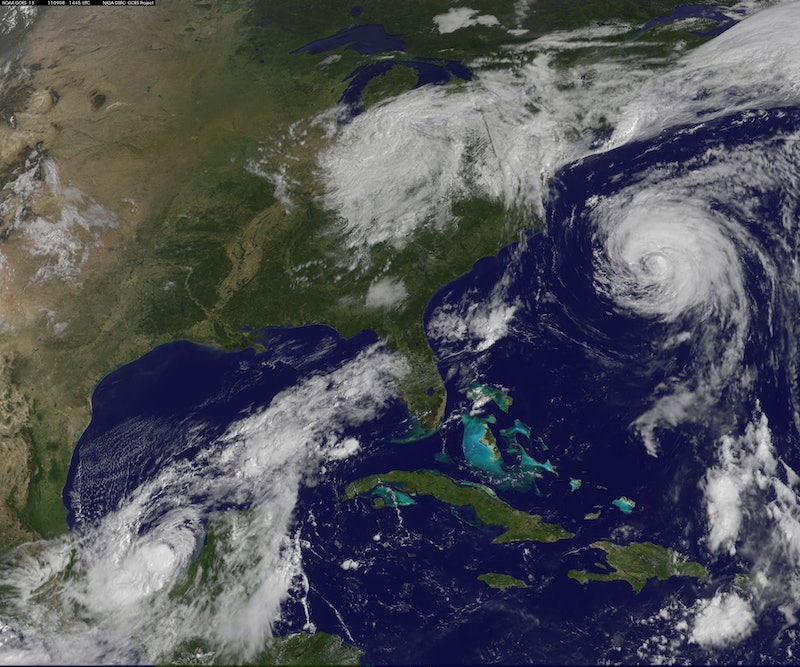 The terrible hurricane season of 2017 continues to batter the southeastern region of the United States. Hurricanes Harvey, Irma, and Maria all dealt historic levels of destruction to the East Texas coast, Florida, and Puerto Rico, respectively, but the terrible havoc wreaked by storms isn't over Hurricane Nate is expected to hit Mississippi as early as Saturday evening.

At just a Category 2, Nate is notably smaller than the previous storms that decimated the coasts in the past month (Harvey, Irma, and Maria were all Category 4 or 5 storms when they made landfall). But with wind-speeds over 90 miles per hour, and all the rain that comes with a hurricane. So far, just the outer bands of the hurricane have started to hit land, but the center of the hurricane is expected to make landfall by Saturday evening.

Evacuation orders are in effect for the storm along the Mississippi coastline. The storm is expected to hit around the same place that Hurricane Katrina did in 2005, which memorably wrought devastation to the city of New Orleans as well as much of the southern coast. No hurricane has made landfall in Mississippi since Katrina.

Storm surges along the coast are expected at seven to 11 feet, with rain estimated at three to six inches (and some isolated places expecting as much as 10 inches). Several casinos in Biloxi, including the Hard Rock Hotel & Casino and the Beau Rivage, are closing early, a rare step.

Nate is expected to chart a path straight through the Eastern part of Mississippi, and to continue straight through the inland United States, all the way past West Virginia on Sunday and to Maine by Tuesday morning. As with all weather predictions, the exact path of the storm is difficult to ascertain and could likely change.

A state of emergency was called by Mississippi governor Phil Bryant for six counties close to the coast in advance of Nate's arrival, and has mobilized the Mississippi national guard to deal with storm recovery efforts. 75 national guardsmen and 60 highway patrol officers have moved to the southern part of the state in preparation for the storm. On Thursday, Bryant tweeted that he was in touch with FEMA director Brock Long and thanked the president for his help in preparation. The Air Force Reserve's 403rd Wing evacuated much of its aircraft in Mississippi away to Texas and Arkansas in before the storm.

Like with previous hurricanes, FEMA and other emergency preparedness agencies are urging residents in the hurricane's path to prepare for what could be days of devastation. They have suggested people expecting the storm to pass near them to stock up on water, medical supplies, non-perishable food, and batteries and other supplies that will allow people to keep phones charged during the crisis. With the storm already beginning to hit the coast, it is too late for people to evacuate if they haven't yet. Officials recommend staying indoors until after the storm has passed.

In addition to areas in Mississippi, Alabama, and Louisiana that will be hit by the storm soon, the hurricane is threatening offshore oil and energy production in the Gulf of Mexico, meaning that damage from the storm could affect energy prices for the whole of the United States if things are especially bad.

According to Lee Sithson, Mississippi's Emergency Management Director, 67 people have already moved into shelters before the storm has hit.

Before reaching the United States, Nate tore through parts of Central America and caused devastating damage there. According to the Associated Press, at least 22 people died so far from the hurricane, with 15 dead in Nicaragua and 7 in Costa Rica.

More like this
'Waterloo Road' Is Back, With More Than A Few Familiar Faces
By Sam Ramsden and Vivian Iroanya
Mollie King & Stuart Broad Just Shared The First Pic Of Their Baby
By Sophie McEvoy
Kendall Jenner & Devin Booker’s Relationship Timeline From Start To Finish
By Jordyn Tilchen and Jake Viswanath
Read Dan Levy's Heartbreaking Message After The Club Q Shooting
By Stephanie Topacio Long
Get Even More From Bustle — Sign Up For The Newsletter