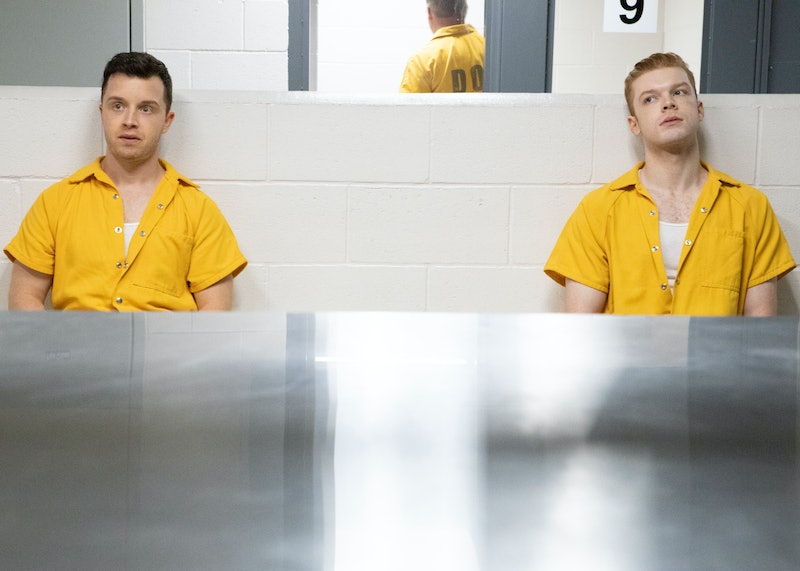 After a brief one-year break that was supposed to be a permanent leave, Cameron Monaghan will play Ian in Shameless Season 10. What he thought would be his final episode in Season 9 reunited him with his ex-boyfriend Mickey Milkovich in prison. In Season 10, they're cell mates, and the ultra-close quarters drive them insane and apart.

"You remember when we first got here? We had fun together," Ian says to Mickey in a preview clip. Mickey's response indicates that, over his five-season absence, he hasn't changed much. "I don't know what you want from me," he barks. "Stop being so annoying." That line is followed by a montage of bickering because well, they're stuck in jail together.

It looks like Ian tries to talk things out and, in typical Mickey fashion, things get heated, fast. "We need a break," Ian says in the trailer, to which Mickey replies: "Are you dumping me?"

Show runner John Wells convinced Monaghan to return on the condition that they revisit this equally beloved and cursed relationship. “That was something that felt worth going back to,” he told Entertainment Weekly. “There’s still a lot of story to tell. We’ve never really had these characters just together in a somewhat stable environment for very long, so that’s been fun to explore.”

Although prison might be considered stable in the world of Shameless, it's definitely not The Ritz. “It turns out that living in cramped quarters without much break from one another is not necessarily all that conducive to a healthy relationship,” Noel Fisher, who brings the angsty Milkovich to life, told EW. “It’s basically living together in the worst studio apartment you can possibly imagine.”

When they're not at each other's throats exclusively, they seem to be arguing over an unknown common enemy. "I'm stabbing him," Ian says in a scene as they both gallop down a hallway. Through his teeth, Mickey grunts, "Not if I get there first."

Monaghan told reporters at the Feb. 6 Television Critics Association press tour that he initially decided not to renew his contract with the show for "creative reasons, as well as business." When reporters asked if he planned to stay past Season 10, he said, "as of right now," he "only signed on for one" additional round. "It doesn't mean that I'm opposed to it. It's just... it's a creative thing as much as it is financial," he said. "It's just good business as well as looking after what I want to do as an actor."

Shameless has yet to be renewed for additional seasons or cancelled, but in August, Showtime's President of Entertainment Gary Levine told the Television Critics Association that "there’s a lot of Shameless left," per Deadline. The British show of the same name that provided the show's premise ran for 11 seasons.