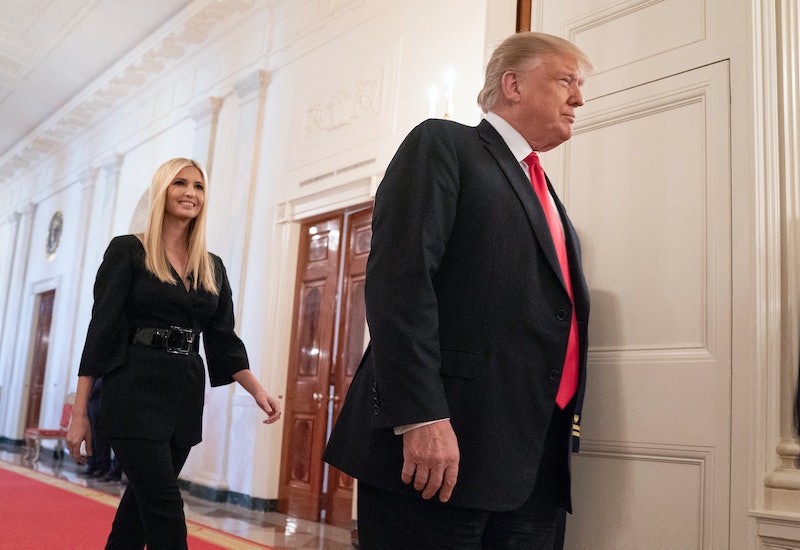 President Trump left Washington Thursday morning for Buenos Aires, to attend an annual summit of the most influential nations on Earth. Given her somewhat controversial appearance last year in Hamburg, it was unclear as to whether Ivanka Trump would attend the G20 Summit this time around as well, though it looks like she spilled the beans on Twitter.

Thursday morning she announced plans to join her father in Argentina, as well as collaborate on labor issues — a primary part of this year's summit agenda — while she's there. "On the way to #G20Argentina!" she wrote on Twitter. "I look forward to meeting with global thought leaders and engaging in dialogue around one of @g20org's agenda priorities: the future of work — to ensure our workers receive the training and education they need to succeed."

A few hours later, she made a throwback reference to last year's summit, where she briefly sat in for the president at a meeting of global leaders. "Looking forward to a successful #G20Argentina," she tweeted. "Throwback to last year’s #G20Summit in Hamburg, Germany." She included a recap video from last year's G20 summit, essentially a slideshow of her attending meetings and greeting world leaders like Angela Merkel and Theresa May. Perhaps apropos to the summit location this year, she also translated her tweet into Spanish and included it below the English version.

Last year, Trump received heavy criticism for representing American interests at a summit meeting about African migration and health issues. She apparently took her father's chair when he stepped out of the room, but that was enough to whip up cries of nepotism and doubt over Trump's qualifications in the issue of African development.

According to the Guardian, it's not uncommon for a leader's seat to be filled by an aide when they step out, but the optics of the aide also happening to be a family member with no prior experience in politics was what raised eyebrows.

"It’s completely inappropriate," Zerlina Maxwell, Hillary Clinton's former progressive media director told MSNBC at the time. "What qualifications and experience does Ivanka Trump have in her background that should put her at the table with world leaders like Theresa May and Vladimir Putin?"

Trump is an unpaid senior adviser in the West Wing, and has taken on labor and family policy issues like paid family leave and child tax credits — though not much has been said about her projects since the summer. Policy-wise, she generally aligns with the president, except on a few notable occasions like family separation, and toward the beginning of his term when he began calling the press the "enemy of the people.

Her contributions to talks about labor, infrastructure, and development at this year's G20 remain to be seen, though by flying to Argentina, she is leaving a scandal behind. Earlier this month the Washington Post reported that Trump was using a government email address for personal use in violation of federal records rules — she maintains that she did nothing wrong.