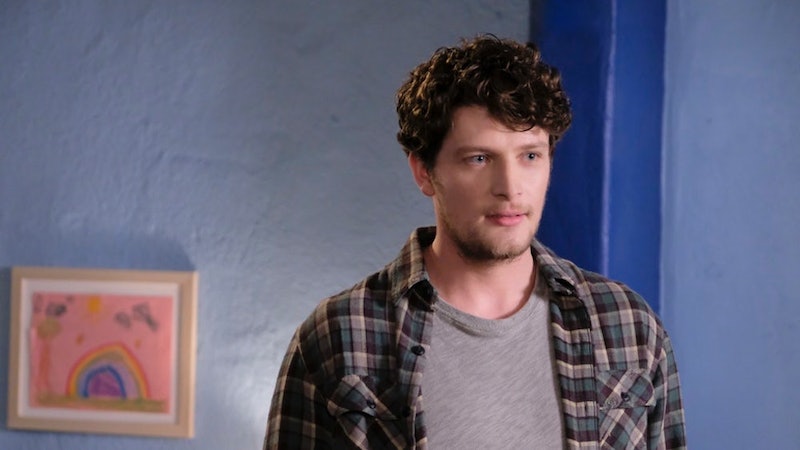 Jane the Virgin is known for delivering shocking twists, but the series broke the mold when it revealed during the Season 5 premiere that not only is Michael alive, but he has amnesia and now goes by the name Jason. And while his return has definitely thrown Jane for an emotional loop, she still has every intention of moving in with Rafael and remaining a couple. So will Jane divorce Michael on Jane the Virgin? Right now it's difficult to know where exactly this plot development is going to go.

At the end of last week's episode, Jane tried her best to spark Michael/Jason's memory and shared as much about her time with Michael as she could. But to no avail — Jason wasn't able to remember anything and continued to be stand-offish toward her. (He even had the nerve to check out Petra in front of Jane and ask if he ever had a "thing" for her. Why?!?!) It was enough to make Jane realize how lucky she is to have Rafael, who has remained by her side throughout this entire ordeal and brought Jason back into their lives, knowing what it could mean for their relationship.

It was the most selfless thing he could've done and she loves him for it. So what does this mean for Jane and Michael/Jason's future?

“It raises interesting questions about the soul and soulmates and what makes a person,” showrunner Jennie Synder Urman explained during a recent interview with Variety. “If we’re a collection of the stories we tell about ourselves, or if we’re actually what’s essentially there — and how experience molds us.”

Urman is also looking forward to exploring Jane's side of things and how far she's willing to go (or not willing to go) in order to help Jason get his Michael memories back. “It’s part of the journey — what does Jane owe this person [and] how can she help him, while also preserving her sense of herself and her family and where she is in her life," Urman stated during the same interview. "How does it not take over her life? The answers to that are not easy, and they keep changing."

Needless to say, Urman is doing her best to not give too much away in regards to this reemerged love triangle. But odds are that even if Jane is intent on staying with Rafael, complications are sure to arise. For one, it wouldn't be all the surprising if Jason/Michael's memory ends up returning at some point, which would make the dilemma of who she wants to be with even more difficult. Right now it's easy because Michael as Jason is no longer the man she fell in love with, but if he were to return to the person he once was, then she'd actually be getting her husband back. But if she's now in love with Rafael, what does that mean for their marriage?

As you can see, the situation is all sorts of complicated, making it pretty impossible to predict. It's possible Jane and Jason/Michael will end up getting a divorce while his memories are still MIA. Then again, maybe she won't be able to fully let go of the idea of getting Jason/Michael back. Either way, prepare yourselves for a very drama-filled final season.

More like this
Here’s Why Danny Masterson’s Hyde Isn’t In 'That '90s Show'
By Brad Witter
The 'New Amsterdam' Series Finale Opens An “Unexpected” Door To The Future
By Brad Witter
The 'Hunters' Creator Wanted The Series Finale To Serve As A "Catharsis"
By Brad Witter
All The ’70s Easter Eggs You Missed In 'That ’90s Show'
By Grace Wehniainen
Get Even More From Bustle — Sign Up For The Newsletter
From hair trends to relationship advice, our daily newsletter has everything you need to sound like a person who’s on TikTok, even if you aren’t.