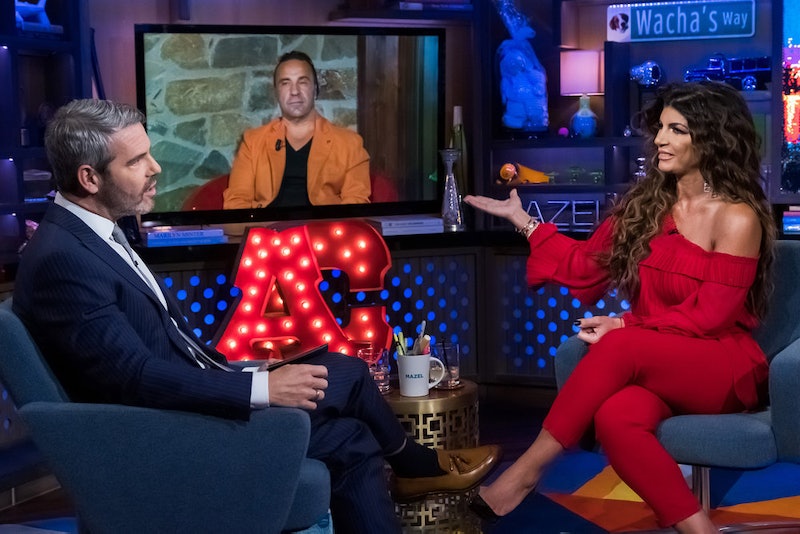 When Teresa and Joe Giudice were convicted in 2014 of wire, mail, and bankruptcy fraud, their respective 15-month and 41-month jail sentences assured they'd be spending virtually no time with each other for years to come. Teresa completed her sentence at the end of 2015, per the Daily Mail, and, according to E!, Joe surrendered himself into federal custody in March 2016. Joe is now out of custody and in Italy, awaiting his deportation hearings. There's clearly a lot happening in their lives, but even though these families document their entire existence on Real Housewives Of New Jersey, it's hard to know if Joe will be on Season 10, which premieres Nov. 6. If he makes it on this season, it will be brief.

Teresa and Joe have been separated for a few seasons of Real Housewives Of New Jersey now, meaning that he hasn't appeared on the show since Bravo aired a special after Teresa's release in 2016. And now, even though Joe is out of jail, he went from federal custody into Immigration Control And Enforcement custody upon release, because he is not an American citizen.

Joe was born in Italy to his parents who emigrated to the United States when Joe was a small child. Joe never did the paperwork to become a citizen, even though he's lived here for the majority of his life. "I just never got [a passport] when I was supposed to get one," Joe told Andy Cohen. Per Bravo, a judge has ordered Joe back to Italy, and Joe and Teresa's lawyers have appealed that decision. He is allowed to stay in Italy while the appeals court processes his case, and it's all pending as of press time.

Because Joe has been away from Teresa for so long (and thus, away from filming and cameras), it's hard to say whether or not he'll appear in Season 10 of Real Housewives Of New Jersey. Bravo says that viewers will see Teresa's journey through all of this upheaval in Season 10, but it makes no mention of Joe. However, on The Real Housewives of New Jersey: Joe and Teresa: Unlocked, Teresa and Joe spoke about how the whole family was going to visit Joe in Italy during the first week of November 2019, and Andy Cohen mentioned that the family's reunion would be filmed for television. (Bravo corroborated that, too.) Andy said, "We'll look forward to seeing that in the season."

But while fans may see the Giudice family reunite, right now, it doesn't seem like they'll see the Giudice family stay together if Joe is deported. At the Season 8 reunion, Teresa said that she would have no problem moving to Italy should Joe be deported, but at the Season 9 reunion in early 2019, Teresa told Cohen that she couldn't do long distance. "You know, I want somebody with me every day. I know exactly what happens," she said. "You know, I’m sure he’ll be with other women. It happens... I’d be like, ‘Bye, bye.'" She even said she didn't know if she was still in love with him.

On the Joe And Teresa Unlocked special, both Joe and Teresa seemed resigned that their marriage was up in the air — Joe repeatedly said that whatever happens, happens in their relationship, and both said that they don't believe that the other has been faithful to their marriage. So basically, there's a ton of drama going on in Joe and Teresa's life right now, and if Real Housewives Of New Jersey fans are lucky, some of it will end up on camera.