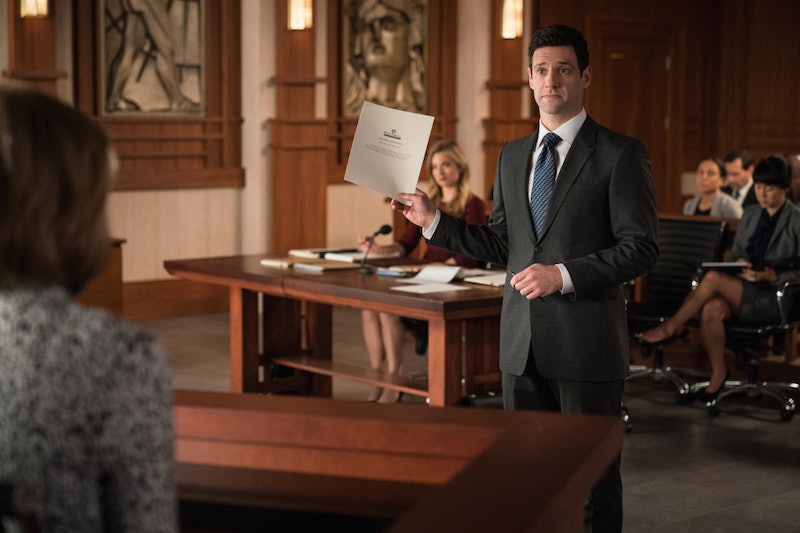 Season 3 of The Good Fight will see the arrival of a while new group of characters, but as more and more characters come in, others leave to make room. The biggest departure of The Good Fight Season 3 will be Justin Bartha, whose role as Colin Morello has been a frequent presence in the show's first two seasons. Bartha's departure from the series was announced soon after the airing of Season 2 by TVLine, meaning that the show's writers had plenty of time to determine how to write Morello out of the series.

While Colin may be exiting as a series regular, that doesn't necessarily mean he'll be entirely absent from the show. His character has relocated to Washington to follow his (and his mother's) political aspirations, but his kid is still in Chicago being raised by his ex, Lucca Quinn. It's likely that Morello will join the massive roster of Good Fight guest stars and appear this season with some frequency to check in on his child. Though he has retired from the day-to-day legal life that forced him to be in close proximity with the members of Reddick, Boseman & Lockhart.

While Colin is primed to become an occasional presence on the show in the same vein as the show's rotating roster of recurring judges or Diane Lockhart's husband Kurt McVeigh, it's just as likely that Colin Morello may disappear and be referred to by name only, muck like The Good Wife character Eli Gold who has never appeared on the CBS All Access series, despite the fact that the character's daughter Marissa is one of the main characters of The Good Fight.

It is also possible that Colin Morello leaves the show after having been given an explanation for his disappearance, much like how the character of Barbara Kolstad was shown leaving Reddick, Boseman & Lockhart during the premiere of Season 2. If The Good Fight doesn't feel like dedicating time to explaining Colin's departure, however, they could simply never mention him again and he can join the long list of characters that seemed like crucial parts of the Good Wife extended universe before vanishing, like Robin the investigator or Taye Diggs' character, both of whom had recurring roles until they very much did not.

The fact of the matter is that now that Justin Bartha is leaving his regular role as Colin Morello, Lucca Quinn is raising a child on her own. While being a partner at a major law firm probably allows for some financial resources to make parenting easier, raising a child and a being a lawyer is going to be a tough balance.

Showrunner Robert King told Entertainment Weekly that her character is impacted by the realities of being a single woman of color in Trump's America, and a working mother to boot. While Colin Morello is moving on to bigger and better things, Season 3 of The Good Fight will reveal whether or not he's leaving Lucca out to dry by moving to D.C.