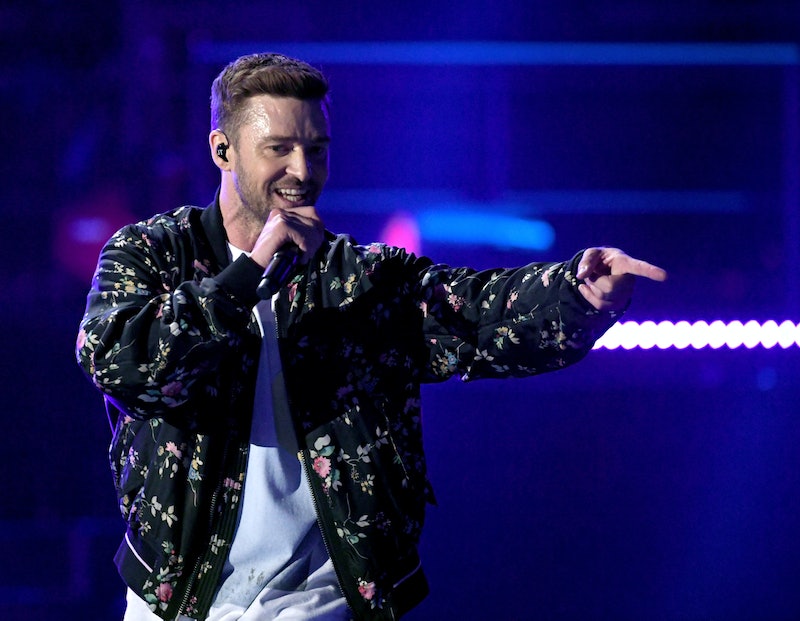 After selling out arenas across England in support of his fifth record Man of the Woods in 2018, it seems as though Justin Timberlake has gone under the radar this year — and for a good reason. While you may be wondering will Justin Timberlake tour the UK in 2020, it seems that he and his long-time collaborator Timbaland might be working on a new record.

Earlier this March, Timberlake posted an adorable AF video of the duo in the studio. "Happy birthday to my brother @timbaland!!!" the caption reads. "More claps that slap soooooon come!!!!!" In addition to that, SZA said she'd recently been recording with Timberlake during an interview with influencer Kerwin Frost. "When I heard his music and we started singing together and the harmonies and the note choices that we were finding together, it's like, 'Oh, we speak the same language'," she said.

It seems that Lizzo may also be involved with this Timberlake project, as he also posted a short clip of him and Lizzo listening to her vocals in the studio. "Lizzo flames, brb," he captioned the post. These hints point to two outcomes: either Timberlake is working on a sixth album with a lotta collaborators, or he's planning on some sort of project with these musicians.

I've reached out to the singer's UK touring rep regarding this, and have yet to receive a reply. I'll let you know if I do. But if these studio sessions happen to be the precursor for a new record, then a tour will most likely be on the cards (with some UK dates in tow, no less).

Either way, an album would most likely be on the way as his last also featured an array of collaborators, including Alicia Keys and Chris Stapleton as Pitchfork reported at the time of Man of the Woods release. Heralded as "one of the greatest live performers of all time" during this 2018 tour by British GQ, it would be a shame not to see the singer back on British shores in 2020.

Although Timberlake's Man of the Woods tour only ended this April, which sold nearly 2 million tickets worldwide. So it wouldn't be surprising if the singer could be aiming towards having a bit of a break touring wise.

If Timberlake doesn't end up releasing new material next year or going on full out tour, there is one record he could celebrate for a few select dates... The 20/20 Experience. I mean, how perfect would that be? Even though that album only came out three years ago, it broke records when it initially released. As NME points out, the album became "the third-biggest [selling] debut for a solo male singer ever in America," and also knocked David Bowie's The Next Day off the charts.

So while there's no confirmation that Timberlake will be making his way across the pond anytime soon, there are a least a few possibilities that may sway him to return to the road next year — whether that be because of a new album, or the possible celebration of a classic.