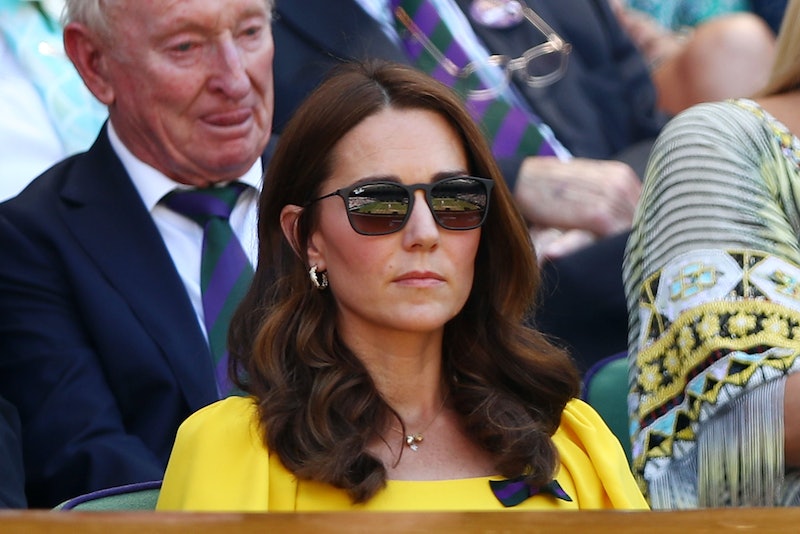 When you're not squinting your eyes to try and follow the movement of the tennis ball, chances are you'll be eyeing up the stands for a bit of celeb spotting. Now that Wimbledon 2019 is about to come into full swing, you might be curious to know which famous faces you should keep a look out for. While you might be able to spot some regular celeb attendees, you might be wondering whether that includes any of the royals, including this lady. So, will Kate Middleton be at Wimbledon 2019? Because it's one of the only times of the year you get to see her in a very slightly less formal setting.

Many of the Royals attend Wimbledon each year, sitting in the well positioned box that's reserved especially for them. While it's not been confirmed whether or not Middleton will be attending, as she does every year, usually with her sister Pippa, I reckon you can still expect to see her there.

She's a reliable spectator, and clearly a big fan of tennis. As the newly appointed Patron of the All England Lawn Tennis Club, she even gushed about her love of the sport to Sue Barker back in July, 2017. So, if you don't see her in the royal box at home, I think it'd be reasonable to assume that something must be up. So, here's hoping you'll get to see the Middletons in all their fancy sunglasses-wearing glory.

Royal expert Victoria Arbiter seems quite certain that Kate'll be there, but she's not sure whether she'll be joined by the usual flock. As she told Yahoo's Royal Box on June 28: “I think we may see Kate and Meghan at Wimbledon together again, which would be great. It would be a lovely show of togetherness," before adding: "They clearly had a great time when they went before and they are the two major tennis fans."

However, Arbiter doesn't seem convinced that the two ladies will be joined in the box by their husbands. “I don’t think we’d see the four of them because I think, again, you’ve got to be aware that if you see the four of them it would totally detract from the tennis that was going on," she suggested. Now many fans of the royals will be waiting with bated breath to see whether or not they do actually sit together, because it could be a significant front.

Rumours have dogged the royals for at least the past six months, as it's been reported variously by newspapers like The Sun and the Sunday Times that the formerly close couples may be on less friendly terms after the division of their households. The quartet appointed separate staff, moved quite far apart from one another earlier, and just last week it was announced that they were splitting their joint charity, as the BBC reports. The official line has always been that this is a standard protocol for division of their responsibilities as William prepares to be King, but attendance at Wimbledon might just give us a little insight into what's going on behind the scenes.

Let's just hope the nation isn't too distracted. Remember, this is a tennis tournament, after all.