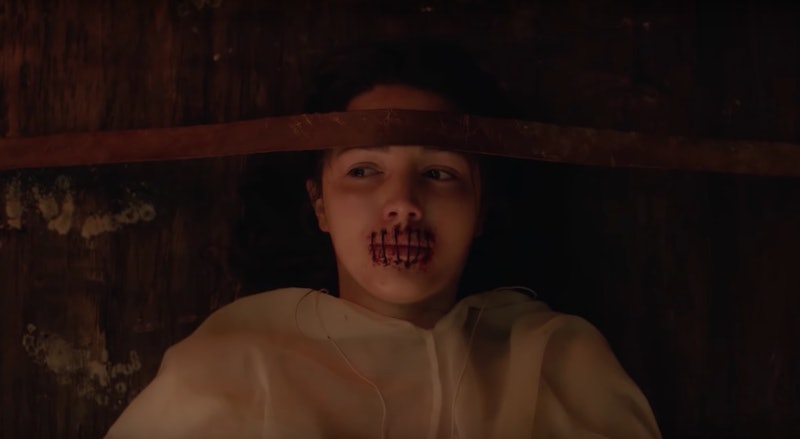 It's that time of the year — time to get spoooooky. As Halloween approaches, everyone is scouring their streaming queues for a good thrill. Luckily, a fan favorite that was turned into an anthology horror series from a storytelling podcast of the same name, Lore just released new episodes on Amazon Prime Video. And if you're one of the many who have already plowed through them, you're probably wondering if Lore will return for Season 3.

Podcast creator Aaron Mahnke announced the renewal for Season 2 in February, so if there were to be a Season 3, it's likely that the announcement won't be made until around that same time next year. "Thank you to each and every one of you who tuned in, left a review of the show on Amazon, and told your friends and family about it," Mahnke wrote on the show's official site. "I couldn't be more proud of the success this TV show has seen so far, and I'm excited to give you a whole new chapter of it later this year."

The show has an American Horror Story feel in that it's also an anthology series — each episode brings a different scary story. The big difference is Lore boasts stories based off of true events and tales, which usually isn't the case for AHS. After all, the term "lore" in itself is an homage to folklore, or legends that have been passed down over time. "As I see it, 'lore' is not mythology, and it’s not modern urban legend… it’s in that sweet spot between," Mahnke told Paste Magazine. "It’s more documentable history with dark undertones to it, whether it’s supernatural or just sinister. It’s the early historical stuff that has gone on to cause us to fear things."

Like AHS, though, the series houses an array of stories, and there's always something chilling that ties them all together. Thomas Kretschmann, who plays a part in Lore Season 2, said in a roundtable interview with Fansided that the underlying theme of Season 2 is "really creepy," and if you've already watched the episodes, you understand why he thinks so.

“Customers loved the first season of Lore for its unique blend of narrative and documentary storytelling, and we’re excited to give them another season of this suspenseful hybrid series,” Heather Schuster, Head of Unscripted, Amazon Originals told Paste of Season 2. “[Showrunner] Sean brings great experience in the supernatural genre, and we’re excited for him to help us tell even more frightening and visually captivating stories.”

The autumn release of both AHS and Lore this year is really every horror buff's dream, and it definitely makes up at least a good quarter of the necessary scary content for the season, depending on the viewer. If only they knew for sure if it would continue in years to come, because it would definitely be a release they could always count on.

For now, the one thing that Lore fans can count on is the continuation of the original podcast. Mahnke continues to create, produce, and release new episodes every two weeks on Mondays. The podcast is nearing 100 episodes, and Mahnke has also released a Lore book series, so if anything, there's plenty of content to work from for future TV seasons.

More like this
David Tennant’s Transformation In ITV’s 'Litvinenko' Is Astonishing
By Sophie McEvoy
Ava DuVernay Thought The 'Queen Sugar' Series Finale Felt “Really Satisfying”
By Brad Witter
Will 'The Walking Dead' Return For Season 12?
By Grace Wehniainen
Theo James Revealed The Truth About His 'White Lotus' Nude Scene & Fans Can't Cope
By Stephanie Topacio Long
Get Even More From Bustle — Sign Up For The Newsletter