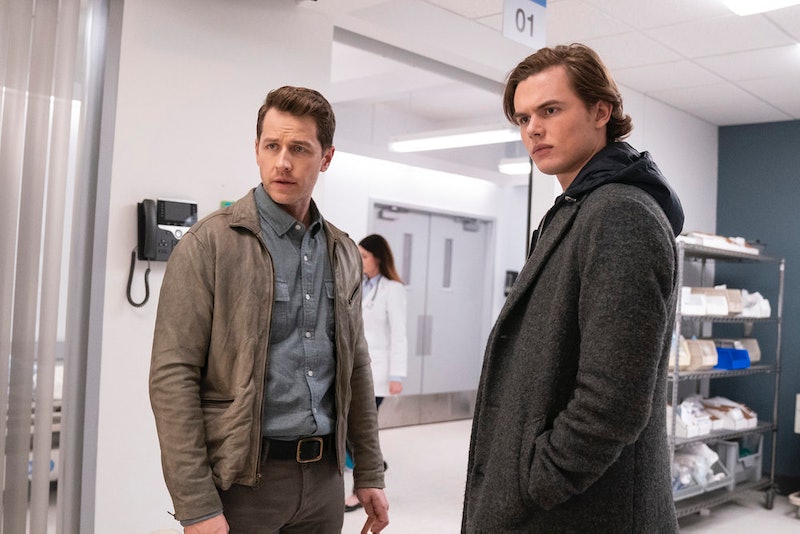 Spoilers ahead for the Manifest Season 2 finale. Josh Dallas (Ben Stone) wasn't kidding when he told TV Line that the Manifest finale would open up so many questions about what's to come in Manifest Season 3. But the show hasn't officially been renewed yet, leaving fans wondering if they'll ever get those answers at all.

But don't panic just yet: while the fate of Manifest still hangs in the balance, that's not unusual for this series — the Season 2 renewal didn't happen until two months after the Season 1 finale, so there's a little time. However, the ratings haven't been great for the show's sophomore season. The show is down about 40 percent in overall viewership from Season 1. On the bright side, it's still averaging about 4 million viewers an episode and is NBC's seventh most-watched scripted series. Shows one through six on that list have already been renewed, so perhaps it's just a matter of time for Manifest.

If it were to come back, Manifest could premiere in January 2021, as this season premiered in January 2020. The previous season taped in November, which is encouraging for the Manifest Season 3 production timeline. In theory, it's possible that the spread of the coronavirus will have been mitigated by November, allowing shows like Manifest to resume filming on time, though that's still up in the air.

Showrunner Jeff Rake has previously said he has a six-season plan for the show. He hasn't yet given any hints about what could be to come in Season 3, which would be midway through his overall plan. But based on what transpired in the Season 2 finale, there's a lot to unpack in future episodes.

Now that the Death Date mystery has seemingly been cleared up, the newest mystery is why Ben keeps having visions of the plane exploding. The passengers all made it safely back to New York in an intact plane, and yet a wing from the same plane was found in the ocean by fisherman at the end of the episode. That's probably what Josh Dallas was referring to when he told TV Line that the finale would "tie up a certain idea about these callings and how we use them; and ... [was] also going to ask more questions." Aside from the new exploding plane mystery, there are some smaller loose ends that need answers come Season 3.

Saanvi killed the Major and consequently had a complete mental breakdown. She had already started to spiral in Season 2, and it seems like Season 3 will continue to be challenging for her as grapples with the aftermath of the crime she committed. Additionally, Olive's boyfriend TJ left to go study in Egypt to get more answers about the Callings. Now that they've seemingly solved the Death Date, he should be able to return. Zeke is also still alive, having beat his own Death Date, and the passengers have a renewed loyalty to the Callings since following them seemed to save Zeke.

One of the biggest questions left, though, is where the Cal's kidnappers went at the end of the episode. Everyone watched them seemingly drown in the frozen lake, but then their bodies were never found. Did they manage to escape? If so, they will likely continue to be a dangerous threat to Michaela and her family in Season 3.

A show like this was never going to give a tidy season finale ending, because there are too many mysteries left to solve. It's unclear if the show will make it to the six seasons that Jeff Rake wants, but at least one more season to help clear up some of these cliffhangers would certainly be appreciated by the fans. Until then, everyone will have to keep theorizing about what the newly discovered plane wing means and what is even happening on this wild show.

More like this
The ‘Love, Victor’ Showrunner Gave Fans Hope For A Possible Spinoff
By Brad Witter
Everything We Know About When To Expect The Rest Of The Upshaws Season 2
By Kadin Burnett
Legacies Showrunner Said There Is Still Hope For More Vampire Diaries
By Gretchen Smail
Everything We Know About When To Expect Money Heist: Korea Part 2
By Kadin Burnett
Get Even More From Bustle — Sign Up For The Newsletter