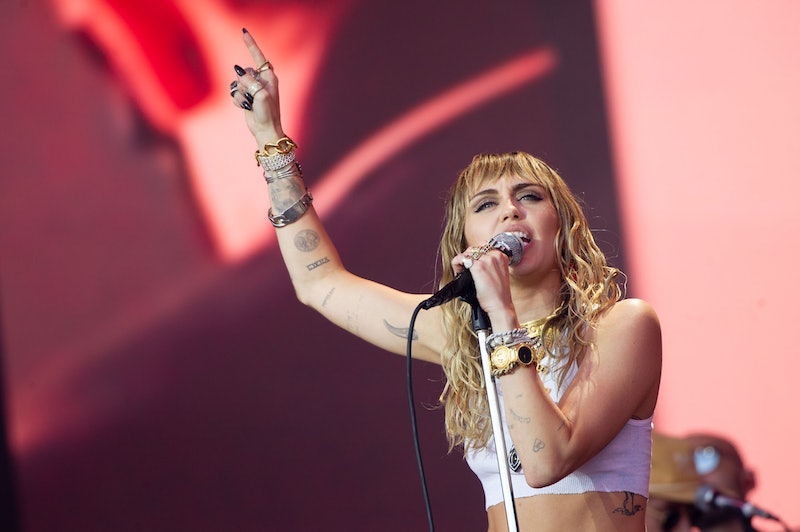 Fans of the multi-talented Miley Cyrus have been spoiled by the U.S. singer in recent months following the release of her brand new EP, She Is Coming. And in addition to fresh music, the "Mother's Daughter" singer introduced fans to her latest alter-ego Ashley O — a character portrayed by Cyrus in the fifth series of Netflix's Black Mirror. The singer also recently wowed festival-goers at Glastonbury 2019, who were treated to an incredible performance by the former-Disney star. But will Miley Cyrus tour the UK in 2020?

As it stands, there has been no official announcement of a Miley Cyrus 2020 tour, and there is currently no information in regards to any upcoming tour dates on the singer's official website. I have reached out to the singer's representatives for comment, and will update with any new information as soon as it becomes available. However, according to Rolling Stone, Cyrus is expected to drop her upcoming album She Is Miley Cyrus later in the year — so a tour in 2020 could be very likely indeed.

The Hannah Montana star's forthcoming album will enjoy an unusual release, and be made up of four separate EP's titled She Is Coming, She Is: Miley Cyrus, She Is Here, and She Is Everything.

As reported by Billboard, Cyrus recently dropped the music video for her latest single, and the lead cut from her upcoming studio album, "Mother's Daughter." The video is packed full of messages in support of women's rights, with phrases such as "Virginity is a social construct," "Feminist AF," and "Not an object" being displayed throughout. The visual is also bursting with cameos from the likes of transgender and disabled model Aaron Philip, trans activist and model Casil McArthur, skateboarder Lacey Baker, Flint water crisis activist Mari Copeny, singer and activist Melanie Sierra, dancer Paige Fralix, activist Tydryn Scott, and last but certainly not least, the singer's mother, Tish Cyrus.

As mentioned previously, the "We Can't Stop" singer recently appeared as the fictional pop star Ashley O in the fifth series of Netflix's Black Mirror. During an interview at Radio 1's Big Weekend earlier this year, Cyrus revealed that the plot of the episode had similarities to her own life, but did insisted that ultimately it wasn't "her story." Speaking to the BBC, she said, "This is the story of females in the music industry. I understand everyone's gone through this but I do think for females in the industry… it's hard to be taken seriously. People assume that if you're not wearing a body suit and singing pop music, why would anyone want to see you."

According to Billboard, some of the tracks performed throughout Cyrus' recent Black Mirror episode, including pop-banger "On a Roll," were given an official release. However, the songs were credited to the singer's fictional alter-ego Ashley O — making Cyrus one of the very few solo artists in history to have charted in the U.S. under three separate names (including Hannah Montana).

With an abundance on brand new music, and even more on the way, a Miley Cyrus tour in 2020 could very well be on the cards, so fingers crossed we get some info soon.