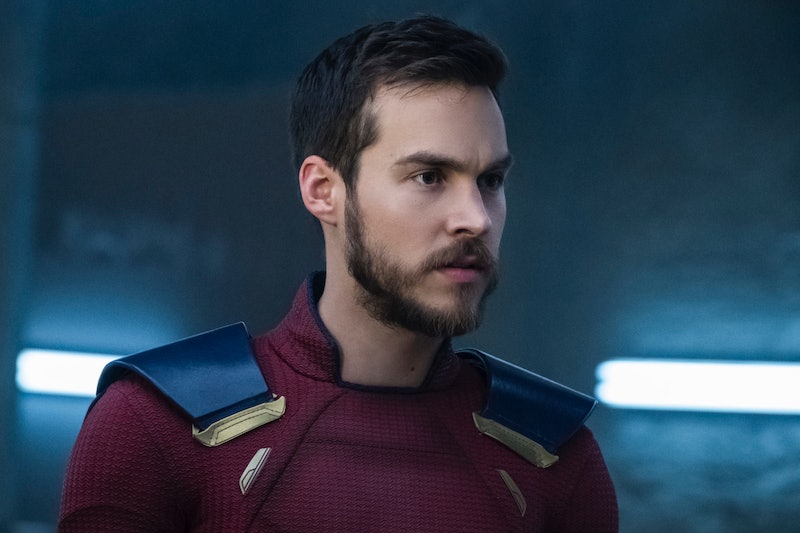 Kara Danvers has faced a lot of obstacles during her time on Earth, but she's always had the support of her family and friends to lean on when things got really bleak. However, when Season 4 of Supergirl returns this Sunday, Oct. 14, there will a few prominent members missing from her team of allies. This is in reference to Winn and her former flame Mon-El, who are sent on a mission into the future. So will Mon-El be in Supergirl Season 4? Unfortunately, Chris Woods' departure is looking to be pretty much for keeps — at least for now.

Back in June, TVLine broke the news that Chris Wood, who played Kara's paramour and superhero partner in crime for the better part of two seasons, will no longer be a series regular on the show. And according to executive producer Robert Rovner, there are currently no plans in the works to bring him back in any capacity for the time being. “The plan for Chris was always to have him on the show for two years,” Rovner explained to the outlet. “We’ve loved telling Mon-El’s story, as well as the story we’ve told for him and Kara. We hope the fans felt that it was a satisfying conclusion.”

“They both have destinies in different times as heroes. What they did was the sort-of Casablanca decision of putting what’s most important to them — which is saving the world — first. It’s a little bittersweet that one destiny is to be a hero in this time and one’s destiny is to run the Legion in another time, but I think they grew a lot from knowing one another. They have respect for one another, and they have a respect for the decisions they respectively made.”

So if you were hoping Mon-El would reappear once his quest in the future was over, you may be left sorely disappointed. However, that doesn't mean fans should totally rule the idea out, given what an integral part to the story Wood played and how much the cast and crew enjoyed working with him. In fact, Rovner is completely open to the option of having him return if the plot calls for it (and if the actor is available to do so).

“We love working with Chris, so we’d love to have Mon-El back someday if the story takes us there and if Chris is available," he told TVLine during the same interview. That being said, it doesn't look as though any sort of return will be happen in the foreseeable future, but just knowing that the possibility exists will hopefully be enough to quell any heartache you may have.

Many may have been hoping to see Kara and Mon-El pick up where they left off before things got so complicated, but alas, our hero of National City may have to look for romance elsewhere. She deserves to be happy, and if we're being honest, it's what Mon-El would want.