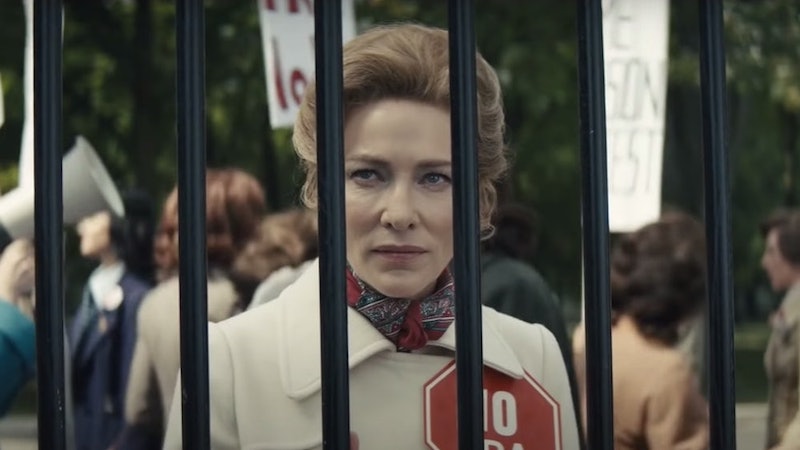 When you've got someone as captivating as Cate Blanchett popping up on your television screen each week, it can be hard to say goodbye. However, with the finale of Mrs. America's first season looming on the horizon, that time is now officially upon us. And considering that Mrs. America has yet to be renewed for a second season by Hulu, it's unclear whether or not the stories of these particular characters will continue. A Season 2 pickup may not be entirely out the question, but there are a few complications the series could face along the way.

First and foremost, the show was initially called a limited series, which in and of itself indicates a very short-term run. That being said, there are always exceptions to that rule. Big Little Lies and Fargo are prime examples of "limited series" that got unexpected renewals when only one season had been originally planned. It's possible Mrs. America could follow in their footsteps, though with so many big names tied to the series, such as Blanchett, Sarah Paulson, Rose Byrne, and Elizabeth Banks, scheduling conflicts could arise, making it rather difficult for a second installment to occur.

On the plus side, Mrs. America showrunner Dahvi Waller seems interested in the option of a Season 2, but admitted there would be a few obstacles to overcome to make it happen. "I don’t know that we would have been lucky enough to get the cast that we were lucky to get if it weren’t a limited series. That’s the great thing about limited: you can get actors who can’t commit to five years," Waller told Vanity Fair in April, when asked if a Season 2 was in the cards.

However, she was quick to add that there's plenty of source material for her to work with should the opportunity present itself. "But... you just never know," she added. "Fargo was supposed to be a limited series, and now it’s on season four. There’s definitely more story to be told."

So if the actors are available and the streaming platform is willing, there's definitely hope that more episodes of Mrs. America could be in our future. But if that turns out not to be the case, we might as well enjoy the rest of Season 1 while we still can.