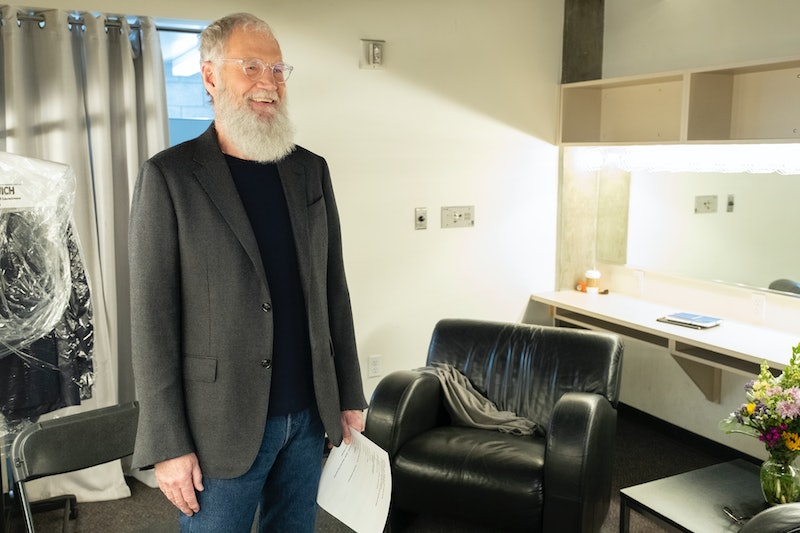 Netflix's My Next Guest Needs No Introduction is returning on Friday to put another crop of celebrities in the hot seat with David Letterman. The show's five-episode second season will feature interviews with Ellen DeGeneres, Melinda Gates, Tiffany Haddish, Lewis Hamilton, and Kanye West — but that still leaves plenty of interesting people that Letterman has yet to speak to. So while there's been no official green light for My Next Guest Needs No Introduction Season 3, it seems like Netflix is more than happy to give Letterman a platform to continue these conversations so long as he is willing.

My Next Guest was initially ordered as a six-episode series which aired over the course of a couple months. The final episode of Season 1 was released in May 2018, but a second season wasn't ordered until December 2018, suggesting that some time was taken to consider whether or not the show should be renewed. However, it seems relatively low-budget. Though My Next Guest does feature many big names, the format isn't incredibly complicated: it just involves filming Letterman and his guests onstage at a chosen venue. Compared to some of Netflix's fictional series, that should be a steal. So if Season 2 goes just as well, the series should be back — and there are a few predictions to be made about the types of guests we could see next.

It's no wonder that Letterman, a comedian himself, stacks his interview roster with fellow comedians. Season 1 featured interviews with Tina Fey and Howard Stern, and Season 2 features interviews with Ellen Degeneres and Tiffany Haddish. Letterman even released a special episode in which the tables were turned and he was interviewed by Jerry Seinfeld. As long as Letterman is choosing his own interviews, it's likely that he'll continue to converse with A-list comedic talent.

Hip-hop artists aren't as obvious a pairing with Letterman as comedians, but the interviewer seems to have an interest in probing some of the genre's greatest minds. His first season featured an interview with Jay-Z, and in Season 2 he's interviewing Kanye West. Could Season 3 see Letterman interviewing another culture-defining rap star like Drake or Kendrick Lamar?

The common thread that every one of Letterman's interview subjects has in common is influence. While interview subjects like Season 1's Malala Yousafzai or Season 2's Melinda Gates aren't as glamorous of subjects as members of the Hollywood elite like George Clooney, they've undeniably had major impacts on the world. Letterman isn't just interested in famous people, but what they're doing with their fame.

Of course, Letterman could have a few surprises up his sleeve. Ultimately, it seems like he's simply interested in talking to compelling people that inspire and influence others in some way. And as long as Letterman wants to keep talking to people and Netflix is willing to keep producing the show, it's likely that My Next Guest will be back again sometime next year.