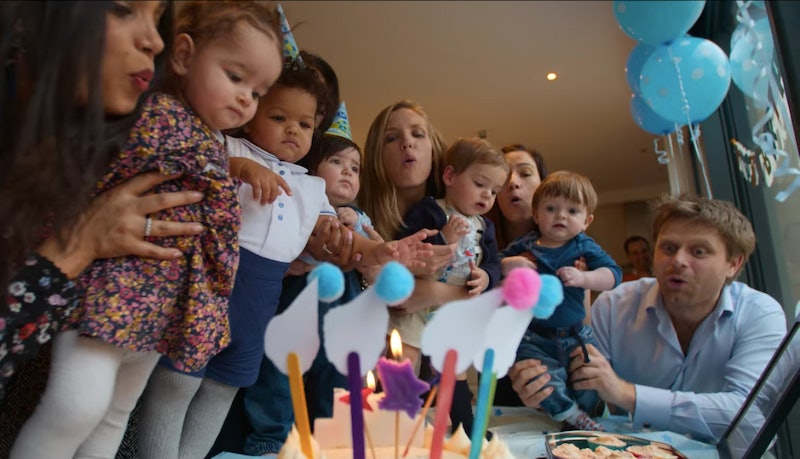 Babies, Netflix's docuseries following 15 babies throughout their first years of life, returns on Friday. The first part of the show, which premiered in February, took three years to film, according to the production company Nutopia. It's unclear if Part 2 was also filmed during that time period, so whether or not Babies returns for Part 3 will likely depend where the season leaves off.

Netflix hasn't made any official announcements, but the Daily Express reported in March that the rest of the show will supposedly be split into two six-episode seasons. An unnamed source told the outlet that the remaining installments will "look at how a baby makes sense of the world. These are some of the more philosophical episodes, that explore what it is that makes us human."

Indeed, each of Part 1's six episodes followed a different stage in an infant's development: love, first food, crawling, first words, sleep, and first steps. The Babies Part 2 trailer suggests it will focus more on emotional development. "Babies want to connect with people," a voiceover says in the Part 2 teaser. "They want to engage in a meaningful, emotional way. How do these connections actually form, and when does this begin? How does it begin?"

A London-based couple, Richard and Amelia, who were featured in several episodes of Part 1 alongside their infant son, told the Express they shot their portion of the show over the course of two years. "They filmed pretty solidly through the first year of [our son Pascoe's] life and then between that and 18 months," Amelia said. "They came back and did a couple of other shoots. So it was almost two years of our life, definitely 12 months was a solid period."

Despite the lengthy filming time, the couple didn't feel like the process was invasive. "The whole approach to the documentary was very much observational," Richard told the Express. "So the producers, the directors, they were very much, 'We're going to observe you guys doing what you normally do.'"

It's unclear whether or not Pascoe and his parents will appear in Babies Part 2, but two years sounds like more than enough time to stretch over the course of three seasons.