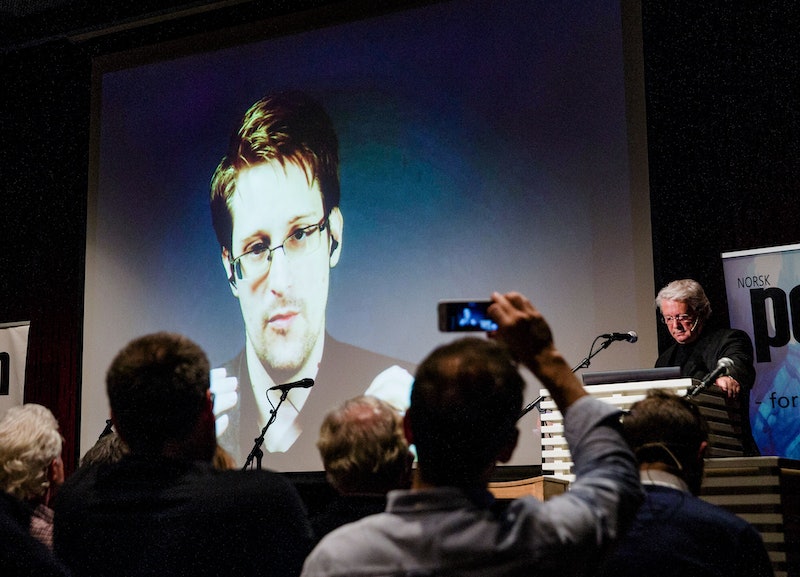 In one of the final acts of his presidency, Barack Obama has commuted the sentence of WikiLeaks whistleblower Chelsea Manning — but many are asking if this means Obama might also pardon NSA whistleblower Edward Snowden.

In short, it's unlikely. At a press conference Tuesday, White House press secretary Josh Earnest noted that Snowden had not "submitted paperwork to seek clemency" with the Department of Justice.

Earnest also made a clear distinction between the two whistleblower's cases. "Chelsea Manning is somebody who went through the military criminal justice process, was exposed to due process, was found guilty, was sentenced for her crimes, and she acknowledged wrongdoing," Earnest said at a press conference last week. "Mr. Snowden fled into the arms of an adversary, and has sought refuge in a country that most recently made a concerted effort to undermine confidence in our democracy."

A petition to pardon Snowden, who disclosed the massive electronic spying program being conducted by the National Security Agency, was delivered to the White House last week with over a million signatures. Still, with only three days left in the Obama administration and no sign of softening towards Snowden coming from the White House, a pardon for the former government contractor seems highly unlikely.

Chelsea Manning was a intelligence analyst serving in Iraq when she leaked over 700,000 documents to WikiLeaks — among the most controversial of which was video of a U.S. airstrike that resulted in the deaths of two Reuters journalists.

Snowden's revelations were much more wide-reaching, and according to a report by the House Intelligence committee, much more damaging to national security. Among the programs Snowden exposed was XKeyScore, which allowed intelligence operatives to search through individual's emails and internet and cell phone metadata without a warrant.

Snowden had been working as a contractor in Hawaii when he took the stolen secrets and flew to Hong Kong, where he shared the information with journalists Glenn Greenwald, Laura Poitras, and Barton Gellman. From there, Snowden fled to Russia, where he was given sanctuary, and where he has been living ever since.

President Obama has been a prolific commuter of sentences compared to his predecessors, with over a thousand pardons and commutations to his name, more than his last 9 predecessors combined.

The White House party line has been that Snowden should return to the U.S. and face charges for his crimes. "He will of course be afforded the kind of due process that’s available to every American citizen who’s going through the criminal justice process," said Earnest.

More like this
It’s Official: The UK Is Hosting Eurovision 2023
By Sam Ramsden and Rachel Mantock
The 'Black Bird' Stars Are Both Heading Back To Apple TV+
By Brad Witter
Here’s Where Kirra Hughes Is Now
By Morgan Leigh Davies
Where Is Charlie Evens Now?
By Morgan Leigh Davies
Get Even More From Bustle — Sign Up For The Newsletter