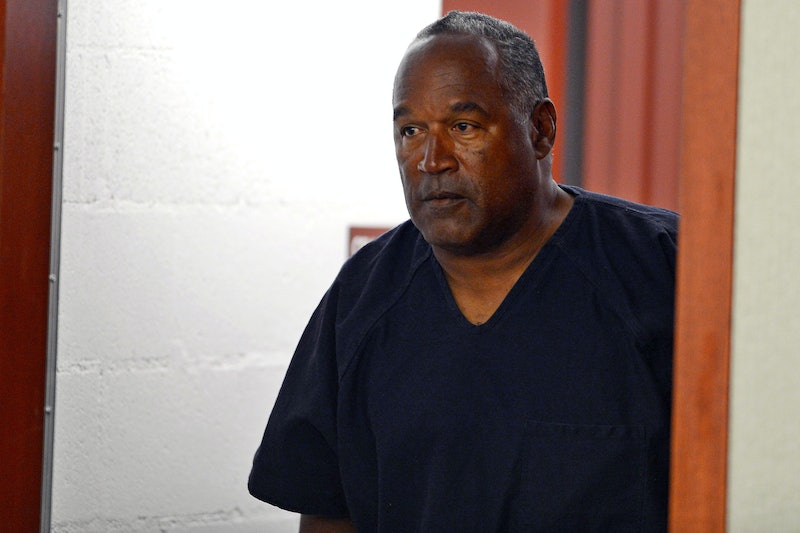 O.J. Simpson has a parole hearing scheduled for Thursday afternoon, and the possibility of early release is on the table. The former NFL star was sentenced to 33 years in prison on armed robbery and kidnapping charges back in 2008, but with the possibility of parole after nine years. Now, that big date is coming up ― Simpson will be eligible to get parole starting on Oct. 3, which is why this week's hearing is drawing so much attention and questions about how it'll turn out.

According to CBS News, legal experts have broadly said that Simpson is likely to be released. Frequently cited reasons include his age, his health, and his reportedly stellar record as an inmate at Nevada's Lovelock Correctional Center ― a former guard has referred to him as "the perfect candidate for parole," without any disciplinary blemishes on his record.

He reportedly suffers from knee problems and diabetes, which have worsened thanks to weight gain, and he's 70 years old. Often, parole boards will consider the age and physical condition of inmates when deciding whether or not to grant them early release, and that's all the more likely to be considered, given Simpson's reported good behavior while behind bars.

The uncertain factor in the hearing, however, is what ― if any ― influence Simpson's high-profile murder trial could have on the decision. Simpson was criminally charged in 1994 for the deaths of his ex-wife Nicole Brown, and Ron Goldman, a waiter at a Brentwood restaurant whom Brown befriended. Simpson was acquitted in what was widely referred to as "the trial of the century," although he was later found civilly liable for Brown and Goldman's deaths.

To be clear, there's no legal or ethical reason that Simpson's 1995 acquittal should make a difference in a parole hearing more than 20 years later. Although the jury's verdict was hyper-controversial and polarizing along racial lines at the time, he was indeed found not guilty, and as such, it would be improper for that to be used against him.

There's absolutely no reason to assume it will be, to be clear. But given how towering an impact the case had on American culture, it's unrealistic to think that everyone involved, as well as everyone watching, won't have some level of awareness or knowledge about the highly sensationalized trial.

As for the conventional wisdom, however, multiple outlets are reporting that Simpson is likely to be released once he's eligible a few months from now.

According to ABC News, the four-person parole board must unanimously vote to grant Simpson early release, and if there's a split decision, two more commissioners will be added, with a 4-2 vote being sufficient to free Simpson. If you're curious to watch the hearing, it's scheduled to begin at 1 p.m. ET, and you can see it on live TV on ESPN or watch it online through CBS News' live stream.