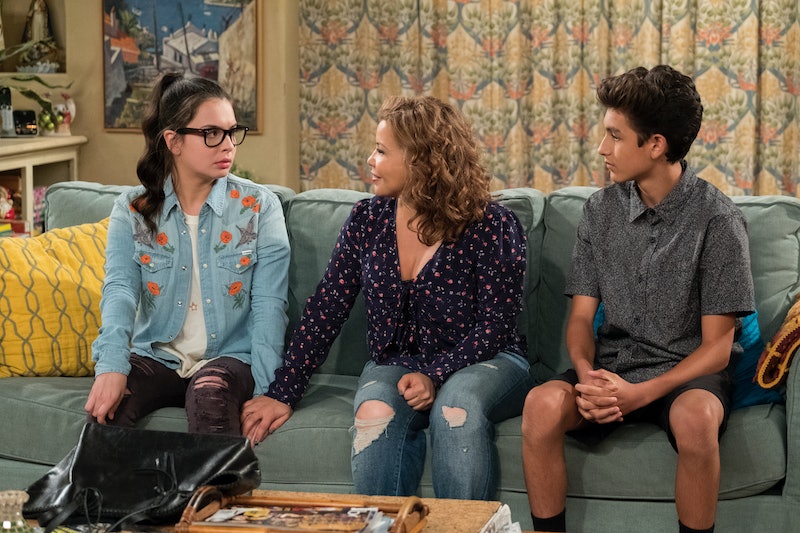 Even as new batches of episodes hits TV screens, dedicated fans are always wondering what's coming next. So in light of the newest season of one of everyone's favorite Netflix comedies, it's time to start thinking of if One Day at a Time will return for Season 4. Unfortunately, there's not a whole lot of information about a renewal just yet for the reboot of the 1975 classic — but there still might not be any cause for concern.

Deadline reported last year that the show was renewed for a third season three months after Season 2 was released, and followed a similar pattern the year before. So, the lack of word on Season 4 right now isn't necessarily a bad thing. In a couple months, if there's still not an announcement, then it might be time to begin worrying.

That doesn't seem like that big of a possibility, though. Rotten Tomatoes gives the show a 98 percent positive critics rating and an 89 percent positive audience score, which is pretty amazing, and the show has been hailed as a victory for diversity in the sitcom realm. One Day at a Time follows a Cuban-American family throughout all their hilarious and heartfelt ups and downs, and it feels like viewers would be sad to see it go.

While reviews for Season 3 are few and far between ahead of the premiere, what is out there is good news for the Alvarez family. Megan Vick of TV Guide praised the show's ability to touch on hard-hitting issues each season — tackling everything from PTSD and depression to racism and homophobia — without becoming too boringly formulaic.

"Each season covers varying topics that are personally affecting the Alvarez family and the world they live in, leading to an emotional bombshell that takes over the final episodes for a bigger arc," Vick wrote. "These issues are tackled with wit, intelligence and vulnerability that brings you closer to the family and makes One Day at a Time one of the best sitcoms on television."

Season 2 was also a big hit among critics, so this is one series that's been at the tops of everyone's lists for quite a while. The New York Times' Margaret Lions praised One Day at a Time's lack of cynical humor, saying it made it a happier viewing experiences than other more biting comedies. "We’re all looking for comedy that numbs the pain, but One Day at a Time cultivates an intimacy and sense of belonging that goes a step further, introducing a level of genuine human happiness into the experience," she wrote.

Also around Season 2's debut, Caroline Framke wrote an entire list for Vox arguing why One Day at a Time is "one of the best, most empathetic shows on TV." She praised everything from the cast's capable performances to the show's ability to feature timely, political storylines without ever feeling corny or outdated.

"Instead of talking about any individual news stories or laws — or, indeed, mentioning Trump by name at all — season two of One Day at a Time weaves the world into its family stories far more naturally, by showing how individual people are actually affected," Framke wrote. "And, crucially, it demonstrates a whole lot of empathy in doing so."

In the wake of such praise, it sure seems like taking One Day at a Time off the air would leave a palpable hole in the television landscape. So while fans can't be totally sure where its future lies, they can relish for now in the three seasons they are guaranteed.