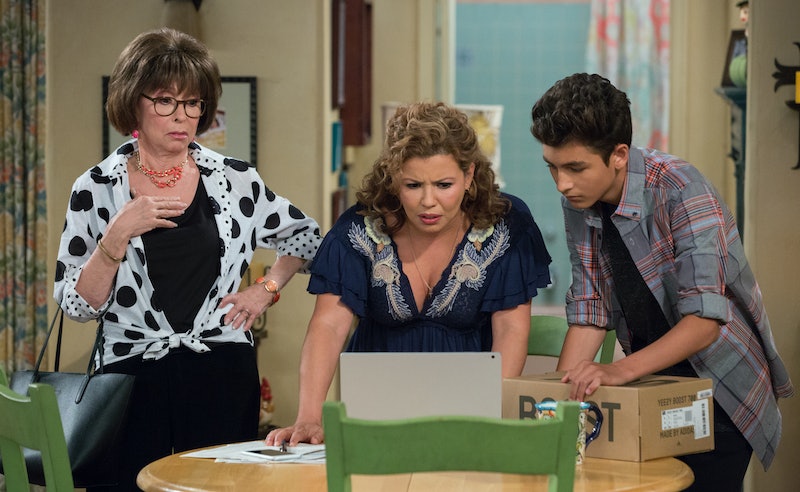 Eight months after the Norman Lear sitcom was canceled by Netflix, One Day at a Time returns to Pop TV on Tuesday, March 24. A ViacomCBS subsidiary, episodes will air weekly on the Pop network, which is available with most cable plans and on Hulu Live. But since many fans don't have cable, it would be convenient if One Day at a Time Season 4 came to Netflix; however, it's unclear whether that will be the case. Bustle reached out to Netflix, who declined to comment, and to Pop TV, who hadn't responded by the time of publishing.

However, there is precedence: the network's other notable property, Schitt's Creek, has been putting its seasons on Netflix after they air on cable. In fact, Netflix is how American audiences discovered Schitt's Creek to begin with in most part. Although the comedy series aired on American TVs since 2015, "Not everybody knew how to get Pop," Schitt's Creek star and co-creator Eugene Levy told Vulture. "So the awareness factor in the States was not, I would say, extremely high."

Although the network amped up their promotions for subsequent seasons, per Vulture, it wasn't until the first two seasons landed on Netflix in January 2017 that the floodgates opened. "I definitely think that the combination of airing on Pop early in the new year and then re-airing in Netflix in the fall — it's kept the conversations happening around the watercoolers in a way," Dan Levy told Vulture.

ODAAT's story is inverse to Schitt's Creek. They've already had three seasons of good exposure (and good reviews) on Netflix, and they've now moved to a traditional cable network. As Pop TV President Brad Schwartz told the New York Times, "We needed a nice, big, shiny new thing for when Schitt's Creek ended," which seems like the perfect descriptor for ODAAT. Schwartz agreed, saying, "It just seemed to be an antidote to everything going on in the world, while also being hysterically funny and incredibly moving."

While ODAAT has found its new home, filming for Season 4 has halted due to the coronavirus, per the L.A. Times, and the writers are working remotely through teleconferencing. "What would this show be if we weren't fighting for our lives?" Gloria Calderon Kellett, one of the showrunners, told the L.A. Times. They have seven episodes left to finish, as Schwartz told the publication, and are currently playing it by ear. "Maybe we have to repeat a couple of episodes before a new one comes. Or, we wait a little bit and bring back the final seven as season 4B. There's lots of options," Schwartz told the L.A. Times, adding that they're "going to make the right decisions for the health of everybody."

But Pop is taking this opportunity to simultaneously air ODAAT on Pop, Logo, and TV Land, the article reported, so audiences will have more opportunities to tune in, in case they only have access to one of those networks and not the others. Fortunately, it seems like Pop plans to hold on to the beloved property for as long as they can. "You'd love to think that this can go on a run like Schitt's Creek and have a nice, who-knows-how-many-seasons run," Schwartz told the NYT.

While Season 4 may not be complete, now is the perfect time for a show like ODAAT to premiere. "[T]he world right now is a weird place," Kellett told the L.A. Times, "and I think our show, the vibe of our show and the messages and the comedy, is just something people will take to right now."

More like this
Here’s Everything Coming To & Leaving Netflix In February
By Jake Viswanath
The 'Freeridge' Cast Shared Their Hopes For A Potential Season 2
By Grace Wehniainen
Netflix Shut Down 'Bridgerton' S3 Rumours About A “Very Dark” Storyline
By Bustle
Everything To Know About A Potential 'Lockwood & Co.' Season 2
By Gretchen Smail
Get Even More From Bustle — Sign Up For The Newsletter
From hair trends to relationship advice, our daily newsletter has everything you need to sound like a person who’s on TikTok, even if you aren’t.