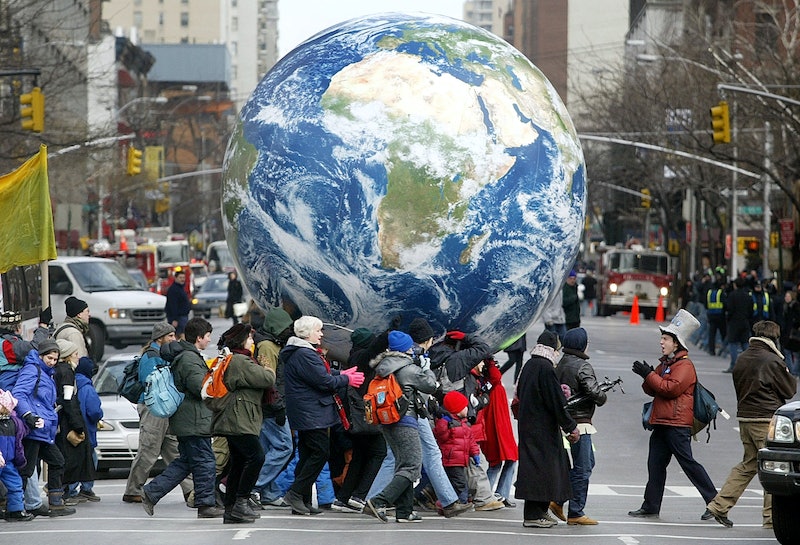 On Thursday, President Trump announced that the United States would be exiting the Paris climate change agreement that President Obama officially signed in 2016. Although this didn't come as a surprise, there has still been disappointment and outrage around the country. Will other countries exit the Paris climate deal as well, following the United States' example? Just hours after the official announcement, it seemed unlikely.

France, Germany, and Italy, in an official joint statement, reaffirmed their commitment to the Paris agreement. In the statement, they said that the agreement "offers substantial economic opportunities for prosperity and growth in our countries and on a global scale." This seems like a direct snub to Trump; in his speech, he commented that the agreement placed economic burdens on the United States that were "draconian."

Other nations have since reaffirmed their own decision to follow the agreement. To make clear his country's position, newly elected French President Emmanuel Macron held a press conference and called to "make our planet great again."

The European Union has also made clear their commitment to fighting climate change through the agreement. "Europe will defend the clean energy transition," tweeted Miguel Arias Cañete, the EU Commissioner for Energy and Climate Action. He denounced the move, calling it a "sad day" for the world. Belgium's Prime Minister also condemned the "brutal act," and China reiterated its commitment to the agreement as well, "regardless of how other countries' policies change."

Even cities within the United States itself have condemned the action and stated their own commitments to the Paris agreement. In response to Trump's comment that he was elected by "Pittsburgh, not Paris," Pittsburgh's mayor Bill Peduto tweeted his promise that the city would still follow the agreement. Chicago Mayor Rahm Emanuel joined in as well, saying that despite what Trump decided for the country, Chicago would reduce its carbon emissions. Dozens of congressmen from across the country, including Keith Ellison (D-MN), Adam Schiff (D-CA), and former vice presidential candidate Tim Kaine (D-VA), have also tweeted various forms of disapproval after the announcement. The governors of California, New York, and Washington also denounced the move.

In exiting the agreement, the United States will be in quiet company. Currently, the only countries not part of the agreement are Syria and Nicaragua. Ironically, Nicaragua's decision was based on the belief that the agreement did not go far enough. The Nicaraguan envoy said that voluntary participation only would lead to failure. Syria, meanwhile, was in the midst of especially heavy conflict in its war when the deal was struck. According to the Washington Post, someone from the Syrian government would have been hard-pressed to make it to Paris for the talks.

However, it is unclear what will happen to the countries that rely on the United States' economic support through the United Nations. In April, the BASIC Ministerial Meeting on Climate Change was held in Beijing. The meeting representatives, including those from from India, Brazil, South Africa, and China, released a statement at the conclusion. In it, they asked developed nations like the United States to "honor their commitments" and "increase climate finance." Specifically, they suggested that developed countries should "provide financial resources to assist developing countries" in the efforts to fight climate change.

Trump has already affirmed that he will cut the money to fight global climate change. Without this money, it is possible that these and other nations will make their own exits for financial reasons.

While there are outspoken cries against the decision to leave the Paris agreement both nationally and internationally, there is still some uncertainty as to other countries in regards to finances. It will be up to the countries remaining in the agreement to fund the difference. Overall, with the firm support of the EU and China, it is possible that the United States will be the only one to break the agreement.