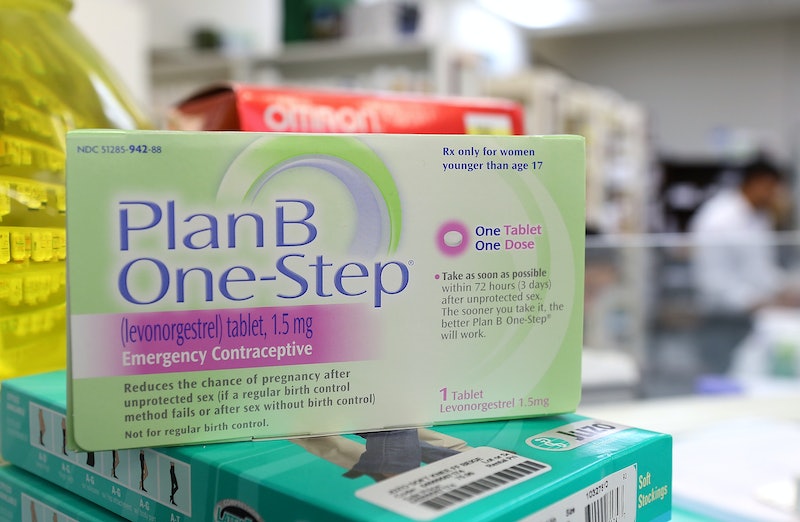 In a move that could impact millions of women, President Donald Trump has found a way to expand on his promise to protect and promote religious liberty. The Trump administration announced Friday it was rolling back the controversial Obamacare birth control mandate requiring employers to fully cover contraception in their health insurance policies at no extra cost to women. But how will Trump's cut of birth control coverage affect emergency contraception methods like Plan B?

While the full affect of Trump's decision to roll back the Obamacare birth control mandate won't be known until later, it certainly stands to impact women's access to emergency contraceptives. Under President Trump's new policy, some women may end up having to pay out of pocket for emergency contraception methods like Plan B, which is available for sale over the counter without a prescription at most drugstores and pharmacies.

According to the Department of Health and Human Services, nonprofits, private businesses, and publicly traded companies will now be able to cease fully funding contraceptives if they have a religious or moral objection. Previously, under the Affordable Care Act, the Obama administration required employer-provided health insurance policies to cover at least one form of contraception in each of the 18 categories of birth control identified by the Food and Drug Administration at no cost to women.

In opening the door for more employers to refuse to offer contraceptive coverage as part of their health insurance policies, the Trump administration could potentially place emergency contraception out of reach for the many women who struggled to afford birth control prior to the Obamacare mandate. According to Planned Parenthood, Plan B One-Step can cost anywhere between $40 and $50 if bought over the counter, while brands like Next Choice One Dose, Take Action, and My Way may cost around $35 to $45.

Yet the Trump administration appears unconvinced that their decision to allow employers more leeway when it comes to covering birth control will have a significant impact on women. Senior officials at the Department of Health and Human Services reportedly told the Washington Post they believed the new rule would not affect "99.9 percent of women" who currently receive birth control through their employer-provided insurance plans at no cost to them. According to the Post, Health and Human Services officials said they'd arrived at that number "based on the finite number of groups that have filed about 50 lawsuits" over the Obamacare mandate.

But critics aren't convinced the Trump administration's new rule won't end up costing women billions in out-of-pocket contraception fees and they're preparing to fight back. According to Politico, both the American Civil Liberties Union and California's attorney general have announced plans to file lawsuits against the Trump administration's new rule. The National Women's Law Center has also announced plans to sue over the mandate roll back, according to the Post, citing gender discrimination and religious discrimination.

"The Trump administration is treating birth control as if it's not even health care," senior council at the National Women's Law Center Mara Gandal-Powers said in a statement to the Post. "We see this as part of the larger war they are waging on women's health. For some [women], it means choosing between preventive care like contraceptives and paying their rent, their mortgage, electric bill."

Whether it impacts one woman or 100,000 women, the Trump administration's move to roll back the Obamacare birth control mandate may once again make contraception, emergency or otherwise, unaffordable for those who need it.