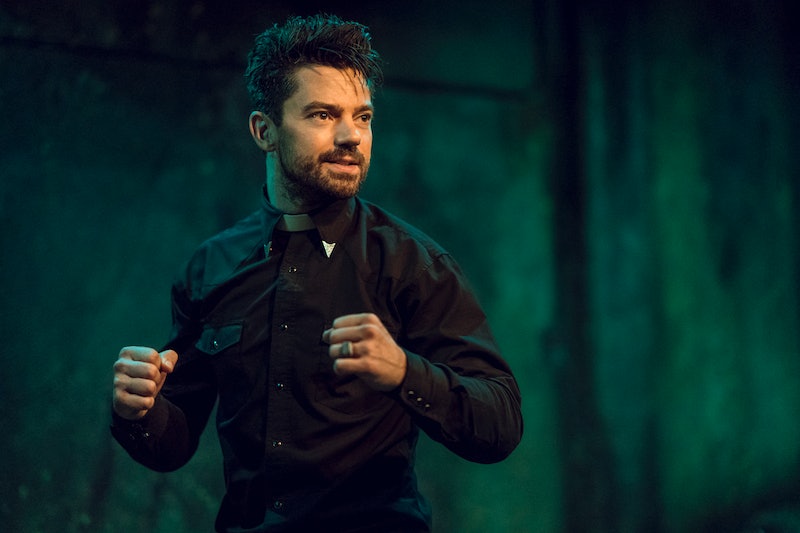 There's a vast array of television shows to fall in love with these days, which is great for fans but can make things a little more difficult for creators who want their series to stand out in a crowd. That's why when an unforgettable show like Preacher comes around, you have to hold on tight and appreciate it while you can — because you never know how long it'll last. Preacher Season 3 is coming to a close this Sunday, Aug. 26, but will Preacher return for Season 4? Or could the third installment of the comics-inspired AMC series turn out to be its last?

As of right now, AMC has yet to greenlight the show for a fourth season, but that doesn't mean viewers should start praying to Jesse Custer just yet. Season 2 came to a close back in September 2017, and the series didn't get renewed for a third season until a month later in October. If that pattern continues, the network won't be making any official decisions for several more weeks. Until then, there's no sense in worrying, so you might as well enjoy ever minute of the finale and hope that this goodbye won't be forever.

One indicator that can sometimes hint that a show is wrapping up for good is when members of the cast start getting roles on other shows. Thankfully, none of the main stars on Preacher, including Ruth Negga, Dominic Cooper, and Joseph Gilgun, have many (if any) projects lined up outside of the series, which is a good sign and proves that they're available should a renewal come through.

That being said, it was just announced, via TVLine, that Graham McTavish — who plays the villainous "Saint of Killers" on Preacher — will be heading over to Lucifer in a recurring role as Father Kinley. The outlet describes his new character as being "A kind, deeply empathetic and revered priest, Father Kinley is profoundly committed to guarding his flock. That includes doing whatever it takes to keep mankind safe from evil — which doesn’t bode well for a certain devil living in Los Angeles."

Now, of course, it's possible that McTavish's schedule could allow him to play both roles with no trouble, so this announcement doesn't have to mean that the show itself is in jeopardy. (He doesn't appear in every single episode anyways, and had an Outlander role during the earlier seasons of Preacher without a problem.) But perhaps it could signify that he'd play a smaller part in the plot moving forward. Either way, none of this is cause for concern in regards to Preacher's future.

It's difficult to say how long AMC will make fans wait before giving an answer one way or the other, but it's clear that Jesse & Co. still have a lot of story they could tell, so they may not be facing the chopping block just yet. Fans deserve more of what this series has to offer. Let's just hope that the network agrees with that fact when it comes time to make the decision.