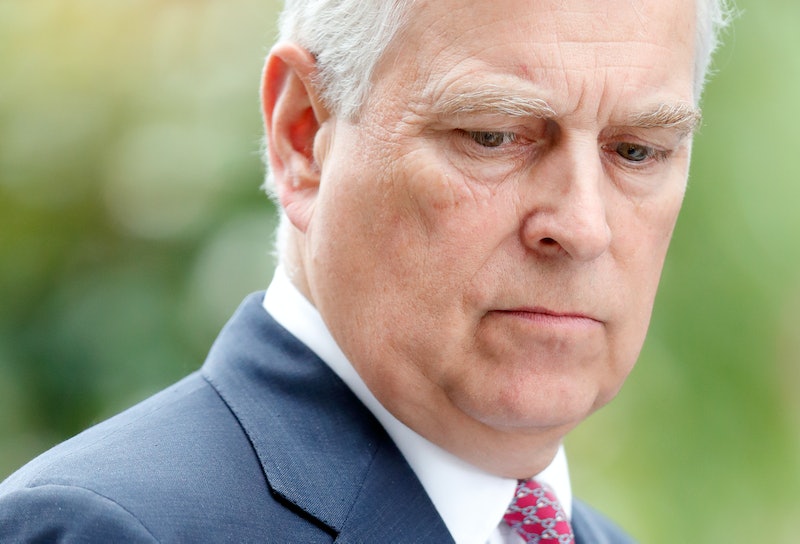 After a highly criticised Newsnight interview and a special Panorama investigation involving his accuser, Prince Andrew's actions and relationship with convicted sex offender Jeffrey Epstein are under scrutiny once again. A lawyer for a handful of Epstein's alleged victims told the BBC he plans to serve the royal with subpoenas, meaning that Prince Andrew may have to testify in U.S. court.

Virginia Roberts, now known as Virginia Giuffre, alleges she was forced to have sex with the Queen's son on three separate occasions in the early 2000s, per iNews. Two of those times allegedly occurred when she was just 17 years old. Prince Andrew has denied all of the allegations, telling Newsnight he had no recollection of ever meeting Giuffre.

But five women accusing Epstein of abuse said the royal was a witness to massages given at Epstein's homes, reports the BBC. (Prince Andrew has denied any knowledge of suspicious behaviour.) Their lawyer, David Boies, said he has prepared subpoenas for Prince Andrew in all five cases.

A subpoena is a summons to court to give testimony. They are usually given to a person directly. In Prince Andrew's case, this will be difficult, former federal prosecutor David Weinstein told the Guardian. "Due to the heightened measures of security that surround the royal family, it certainly is far more difficult to walk up to a member of the royal family and serve them a subpoena as you would a private citizen," he explained.

That's not the only hoop that would have to be jumped through before Prince Andrew could be served. The subpoenas would have to be signed off by a judge when the royal was physically in the United States, according to the BBC. Once served, the prince would also be able to challenge the subpoena if he didn't want to comply.

Former prosecutor Julie Rendelman told the Guardian she would tell a client potentially at "risk of criminality or criminal liability" to "plead the fifth" if subpoenaed to appear in front of a grand jury. (The Fifth Amendment forms part of the U.S. Constitution and allows people the right to refuse answering any questions that could self-incriminate.) “There’s nothing to be gained by talking to a grand jury without immunity in those circumstances," she added.

Boies said lawyers "have tried" to interview Prince Andrew "to try to get what his explanation is. He was a frequent visitor. They ought to submit to an interview. They ought to talk about it."

An official statement given from Prince Andrew to Panorama read: "The Duke of York unequivocally regrets his ill-judged association with Jeffrey Epstein. Epstein's suicide left many unanswered questions, particularly for his victims. The Duke deeply sympathises with those affected who want some form of closure.

"It is his hope that, in time, they will be able to rebuild their lives. The Duke is willing to help any appropriate law enforcement agency with their investigations, if required."

During his Newsnight interview, per the Guardian, Prince Andrew said he is prepared to give testimony "if push came to shove and the legal advice was to do so." Time will tell if that scenario becomes a reality.

More like this
This Is When Netflix Is Going To Start Charging You For Sharing Passwords
By Darshita Goyal
Pret & Costa’s Coffee Is The Strongest On The High Street, According To Which?
By Sam Ramsden
Twitter Has *A Lot* To Say About The "Single Penalty”
By Sam Ramsden
Rita Ora Finally Opened Up About Marrying Taika Waititi & Their "Perfect" Wedding
By Sophie McEvoy and Catharina Cheung
Get The Very Best Of Bustle/UK
Sign up for Bustle UK's twice-weekly newsletter, featuring the latest must-watch TV, moving personal stories, and expert advice on the hottest viral buys.