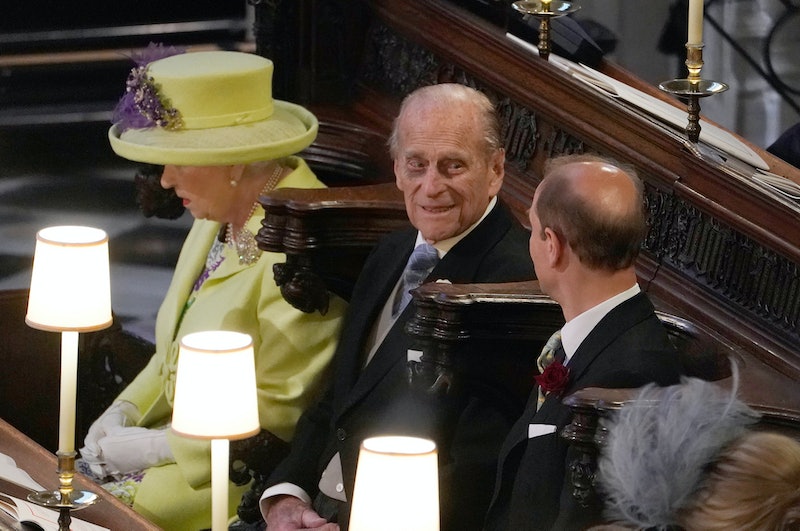 On Friday, President Donald Trump and First Lady Melania Trump are set to meet Queen Elizabeth II in the United Kingdom. The meeting will take place at the luxurious Windsor Castle, but some observers may have a pressing question: Will Prince Philip meet Trump? For now, it's hard to say as there have only been reports involving the president and the first lady meeting the queen.

The president's meeting with the queen will come shortly after the mayor of London, Sadiq Khan, approved protesters' request to float a giant-sized balloon that depicts Trump as a diaper-donning infant over the city. The Guardian reported that Trump might avoid London altogether given the protests. But the U.S. ambassador to the United Kingdom, Woody Johnson, told the newspaper, "No, the president is not avoiding anything. The president is merely trying to get as impactful a trip as he can get in a 24-hour period."

The president's hosts in the United Kingdom also seem eager to see him, according to a spokesperson for Theresa May who told Business Insider, "We're looking forward to making sure [Donald Trump] can see and appreciate the United Kingdom beyond London and the South East."

So how does Prince Philip factor into all of this? Although the prince is technically retired from making public appearances as a royal figure, he might join the queen in hosting Trump and Melania if he is compelled to. Last year, the prince concluded his decades-long public royal life after attending a Royal Marines parade at Buckingham Palace.

In spite of his retirement, joining the queen in public appearances isn't entirely ruled out from the prince's life. Last year, a Buckingham Palace spokesperson told CNN that the parade for the prince had brought his "individual program to a conclusion, although he may choose to attend certain events, alongside the Queen, from time to time."

So far, there have been no reports on Prince Philip's opinion of the American president but there have been reports about younger royals' apparent dislike for Trump. Last year, the author of British royalty-relevant book called Game of Crowns, Christopher Andersen, told The Daily Beast, "The Duke and Duchess of Cambridge and Prince Harry have all privately expressed their distaste for Trump."

Apart from meeting the queen at Windsor Palace, the president is also expected to attend a black-tie dinner at Blenheim Palace. The palace, which is in the verdant Oxfordshire, will host close to 100 business figures along with the president and May. Prior to the dinner, Trump will be given a military demonstration conducted by various guards from Scotland, Ireland, and Wales.

The meeting between the queen and the American presidential couple is expected to be a simple affair — as opposed to one attracting much public fanfare and attention. People have already suggested that Trump be at his best behavior. Royalty experts like Sunday Express editor Camilla Tominey have told NBC News that Trump should put extra care in his presence around the queen. "He’s a massive Anglophile and he’ll want to impress," Tominey said. "I don’t think he’s going to want to put a foot wrong."

In all likelihood, according to Business Insider, it's most possible that the American president will not get to meet Prince Philip. But you never know as there could be a last-minute change to the plan. If the queen requests the prince to meet Trump, he might just do it. So, if you're keen to see such a meeting, keep your eyes open for updates on Trump's visit to the U.K.