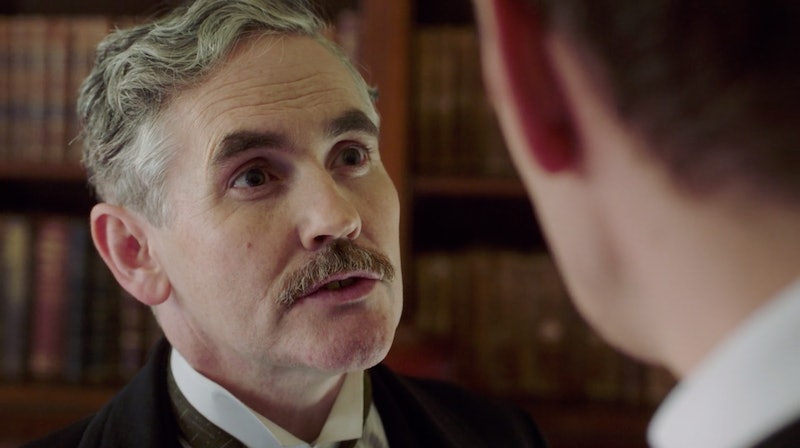 Irish history buffs will be happy to know that Rebellion Season 2 hits Netflix on Friday, Feb. 22. And since it's been three years since the first installment aired on SundanceTV in the U.S., it's only natural to wonder if Rebellion will return for Season 3. It's exciting that the show is finally back, but given how long it's been, does it mean it's low on the network's list of priorities? It seems like its team is doing all they can to amp up the story.

While Rebellion Season 1 followed Dublin's Easter Rising of 1916, Season 2 picks up four years later, in the wake of World War I. The second installment aired in January 2019 on Irish television, where it was called Resistance, per The Journal. However, on Netflix, it will be referred to as Rebellion Season 2 — likely to minimize confusion. As for the premise, Rebellion Season 2 takes place in 1920, per Irish network RTÉ. Furthermore, Journal reporter Rónán Duffy confirmed during an August 2016 news conference that Resistance would take place during the War of Independence.

A few familiar faces will be returning from Season 1, including Jimmy Mahon (Brian Gleeson) and Minnie Mahon (Jordanne Jones). However, there will also be several new characters, including Conall Keating (Joey Bradley) and Jimmy's brother, Patrick (Jimmy Wilmot). But the heart and soul of this season will be a new character named Ursula Sweeney (Simone Kirby). According to the Irish Examiner, Ursula works as a code breaker for the British, but decides to switch sides in order to regain possession of her illegitimate child.

"[Ursula is] estranged from her sister, who is a supporter of the Irish Republic but not of the violent side of it — although it's very hard to extricate the two from each other," Resistance director Catherine Morshead told the Irish Examiner. Gleeson confirmed this tension in the below teaser for Season 2, saying, "Really what the show's been addressing is that fog of war aspect of the conflict, with informants and spies, it was all very, very murky. And there's no good guys or bad guys — it's just about people."

Furthermore, this season promises to be a bit more fast-paced than the previous installment. "The series starts at the point where there are two states — the Brits and the Irish Republic — working alongside and against each other," Morshead said in the same article. "It was definitely meant to be a thriller feel to it, which is why I shot it predominately handheld and kept it quite pacey."

And while it's still too soon to tell whether Rebellion will be coming back for a third time, a February 2019 Guardian article mentioned that creator Colin Teevan wanted to create a trilogy. The final chapter would ideally cover the civil war from 1921 to 1922, when IRA leader Michael Collins was assassinated in Cork, per the BBC. That said, even getting renewed for a second time was a bit touch-and-go for a while, since Season 1 was met with such mixed reviews — many of which centered around historical inaccuracies.

The head of RTÉ Television at the time, Glen Killane, acknowledged the show's poor reviews, saying in August 2016 that "there were things we could have improved on," per the Irish Times. "No piece of television is ever perfect and there are always things that can improve. We have this motto of constant improvement, constantly striving to do things better." But the show must go on, and filming for Resistance began in October 2016, per the Irish Film & Television Network.

It sounds like their hard work paid off, since Resistance has fared better on Irish television, with both the Independent and the Irish Times giving it fairly positive reviews. That said, only time will tell how Rebellion Season 2 received on this side of the proverbial pond. But even if all we get is two seasons, it's still an interesting and educational show for Americans to learn about history beyond our borders.