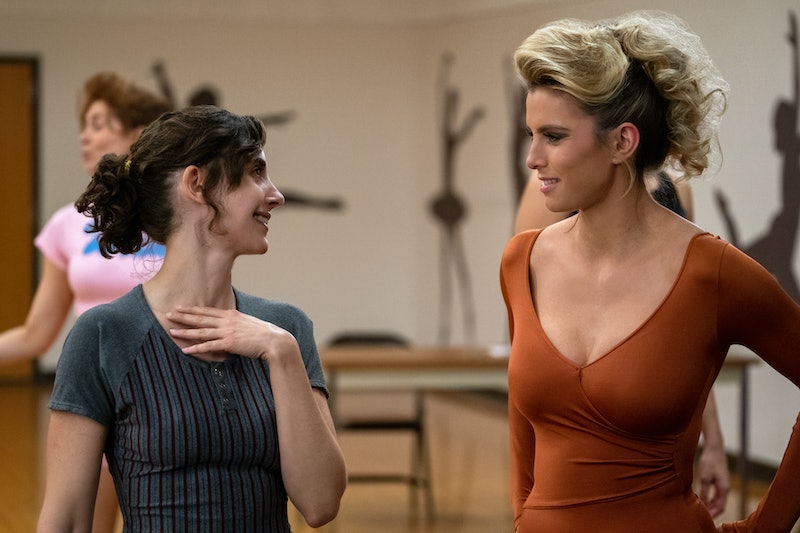 Spoilers ahead for GLOW Season 3. GLOW's Season 3 ending seemed to have everyone poised for success. After setting up a deal with Bash to buy a television network, Debbie had it all mapped out: they'd put the show back on TV where it had started, she'd run the network, Bash would be the money man, and Ruth would direct. Except, much to her surprise, Ruth declined the offer — which could have even bigger implications that it initially seemed. If she's not directing, does this mean Ruth will quit GLOW entirely? The Gorgeous Ladies Of Wrestling are moving on to bigger things... but they may be moving on without her.

As Debbie explained in her pitch to Ruth, the plan was to build an empire they could run on their own terms. "I'm going to build us an Eden, where we run the show, you and me," she told Ruth in the finale. "No more auditions. No more being at the mercy of these f*cking idiots. We'll call the shots." But whereas Debbie sees this is a chance to get out of an industry largely dictated by men, Ruth sees it as giving up on her acting dreams, which apparently, she's not ready to do.

"Ruth's character spends the second half of this season really worried about the fact that everybody else seems to be moving forward with their lives and she's just stuck still, but then she makes one of the bigger decisions of anybody at the end of the season," executive producer and co-showrunner Carly Mensch told Entertainment Weekly. "I'm worried about her. But I'm proud of her at the same time."

Ultimately, it comes down to the fact that Ruth and Debbie don't want the same things anymore. That's always difficult for friends to realize, especially when they've been through as much together as Ruth and Debbie. But their definitions of success are different. Debbie sees the business side of Hollywood as a way to create a fulfilling career and open doors for other women, but Ruth has always been more about finding that fulfillment in her own art. "I don't want an off-ramp," Ruth tells Debbie. "I never even got on the road."

With these developments, the future of the Gorgeous Ladies Of Wrestling is now completely up in the air — especially considering Ruth isn't the only one moving on from the show. Just before Debbie broke the network news to Ruth, Carmen quit to go on the road and wrestle with her family, and Sam is going to be busy directing his daughter's movie. If and when the show returns for Season 4, there may be more characters who jump ship.

As for Ruth, she could technically continue to perform on the new show while auditioning for other roles. And while she figures out what's next for her, she may want to hang on to the steady paycheck. The only catch there is that Debbie and Bash don't own the legal rights to any of the old GLOW characters, so Zoya the Destroya will have to go into retirement even if Ruth does want to keep wrestling.

Turning down Debbie's opportunity was just the beginning for Ruth. What she does next remains to be seen, but hopefully she looks back and knows she made the right decision.