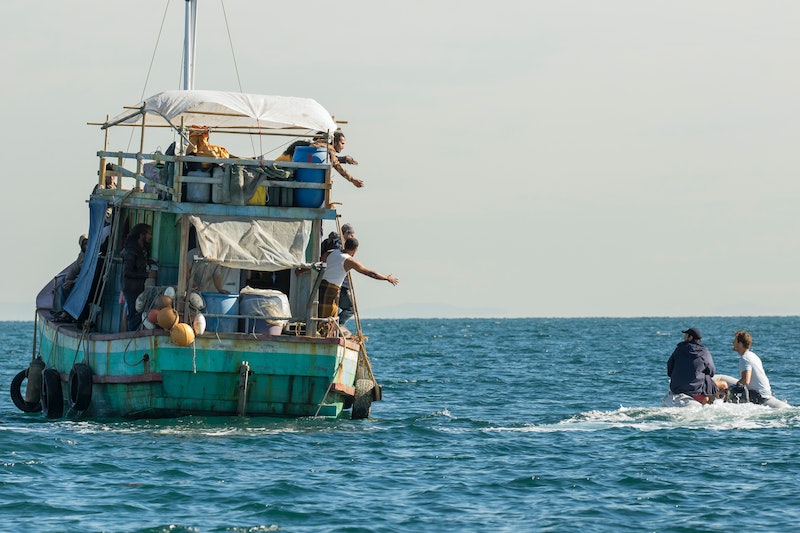 Coming to Hulu on Aug. 24, Safe Harbour is a thrilling four-part series that examines how a horrible tragedy still haunts those that were involved five years after the fact. Themes of regret, distrust, and the humanity of refugees in seek of asylum are explored. The season is a quick watch, and audiences wondering when Safe Harbour will return may be disappointed to find out that there has been no announcement from Hulu — or Safe Harbour's original broadcaster, Australian network SBS — indicating that the show will return for a second season.

In a press release announcing their acquisition of the series, Hulu refers to Safe Harbour as a "four-part event drama," which hints that the show was built to have a short lifespan, making its limited run an "event." The structure of the show suggests that the series will revolve around a central mystery, which means that the series may end for good once that mystery is solved. However, while the show may end with the revelation of a culprit, the story may extend beyond simply discovering who is at fault for the tragedy that kicks off the events of the series by further delving into the trauma experienced by those close to it.

The question at the center of Safe Harbour is a simple one: "Who cut the rope?" But even asking this simple question has wide-reaching consequences. While vacationing, a group of Australians come across a boat filled with refugees and offer to tow them to safety. By the next morning, however, the refugee boat is gone. Five years later, someone from that boat of refugees reveals that the rope that attached the Australian's yacht and their boat had been cut by one of the Australians, and seven refugees died as a result.

This mystery informs the conflict of the show's first season, but that doesn't mean the show has to end once that question is answered. The conflict between the refugees and the Australians that, willingly or otherwise, betray them could give birth to new questions and new dramatic events that could sustain the series once the answer is provided.

The first season hints at the internal conflict that those on the yacht deal with, as Safe Harbour star Phobe Tankin tells Mama Mia that her character, Olivia, becomes a far different version of herself in the wake of the tragedy. "The ripple effect from what has happened, from what she experienced on that boat, you can really see what the consequences were," she said. "Even the visual aesthetic of Olivia has changed, she is no longer someone who looks after herself..."

The show jumps five years between the cutting of the rope and the revelation that the rope had been cut, but Safe Harbour could continue to jump through the character's lives and examine how they're affected by lingering guilt or trauma.

While it's possible that the show's conflicts could be resurrected for another season, SBS may be waiting to see if Safe Harbour can capture worldwide interest through Hulu before ordering a second season. While those interested in the series may want to see the conflict between the refugees and the Australians that abandoned them continue to play out, some viewers may enjoy knowing that they won't be left with a cliffhanger, and that the end of the fourth episode will feature a concise ending. Whether or not Safe Harbour will return for another season, the first promises to be a harrowing look at how people view each other's differences and what kind of cruel acts they're willing to commit.

More like this
Ava DuVernay Thought The 'Queen Sugar' Series Finale Felt “Really Satisfying”
By Brad Witter
The 'Dead To Me' Creator Says Her Series Finale Idea “Felt Very True To The Show”
By Brad Witter
Will 'The Walking Dead' Return For Season 12?
By Grace Wehniainen
The ‘Emily In Paris’ Season 3 Trailer Teases Major Career & Love Crossroads For Emily
By Bustle Staff
Get Even More From Bustle — Sign Up For The Newsletter