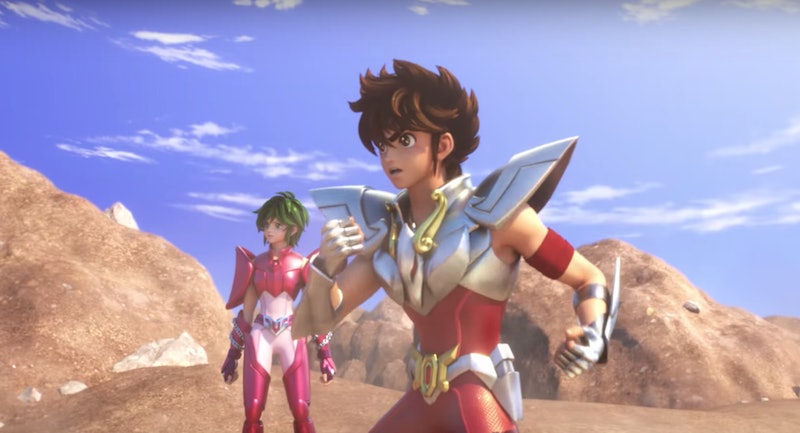 Saint Seiya may be a new name to people browsing Netflix for a new series to watch, but that title has the power to inspire awe in anyone who has been following the series for decades. The Netflix original series Saint Seiya: Knights Of The Zodiac is a new rendition on a story that has been adapted multiple times — and while there's no confirmation of a Saint Seiya Season 2 yet, the series is leaving plenty of the story of Saiya left untold to serve as the basis for future episodes.

Saint Seiya initially ran in print form in the legendary Weekly Shōnen Jump magazine, which is responsible for launching internationally recognized anime franchises like Naruto, One Piece, and Dragon Ball. Saint Seiya's run extended from the beginning of 1986 to the end of 1990, eventually released in a standalone series spanning 28 volumes.

Cinema Today announced that the Netflix series would extend from the series' beginning through what is known as the "Silver Saint" arc, which occurs in the fifth volume of the original manga volume releases, leaving a whopping 23 volumes left waiting to be adapted into future seasons of the show — and that's without considering spin-off and sequels such as Saint Seiya: Episode.G, Saint Seiya: Next Dimension, Saint Seiya: The Lost Canvas, or the most recent iteration of the franchise, Saint Seiya: Saintia Shō.

Saint Seiya's legacy isn't limited to print, however, as the franchise has spawned numerous Original Video Animations and animated series over the past few decades. The original Saint Seiya: Knights Of The Zodiac series ran for 114 episodes starting in 1986, with the first 73 pulling directly from the original print manga and the remaining episodes telling an entirely original story. The manga was later revisited in a 2002 anime adaptation that adapted the conclusion of the original manga over 31 episodes. In addition to those 145 episodes that spawned from Saint Seiya, the franchise has also received a spin-off anime entitled Saint Seiya Omega, two novels, six animated films with plans for a live action Seiya film underway, multiple video games, and even a stage musical in addition to copious amounts of merchandising.

Saint Seiya: Knights Of The Zodiac is a cultural powerhouse in Japan, and yet its popularity hasn't struck with American audiences. While Saint Seiya is far removed from the story's date of origin, the existence of a new CGI series being made available worldwide at the same time could introduce a variety of new people to the story of Saint Seiya. While there's no confirmation that the series will be receiving a Season 2, the fact that the franchise is such a powerful cultural force in Japan suggests that the show will do well enough to justify more episode being ordered thanks to its built-in audience of longtime fans. Should Netflix's rendition of Saint Seiya not return, however, there is plenty of Seiya media out there for new fans to dig into to ease the disappointment of not getting a new season.

More like this
Wait, Is 'Happy Valley' Not Actually Over?
By Darshita Goyal
The Full EGOT Winners List: Only Viola Davis & These 17 People Are EGOTs
By Radhika Menon, Marina Watts and Grace Wehniainen
'The Last Of Us' Episode Schedule Competes With The Super Bowl & Oscars
By Brad Witter
Grammys Host Trevor Noah Made Adele's Dream Of Meeting The Rock Come True
By Brad Witter
Get Even More From Bustle — Sign Up For The Newsletter
From hair trends to relationship advice, our daily newsletter has everything you need to sound like a person who’s on TikTok, even if you aren’t.