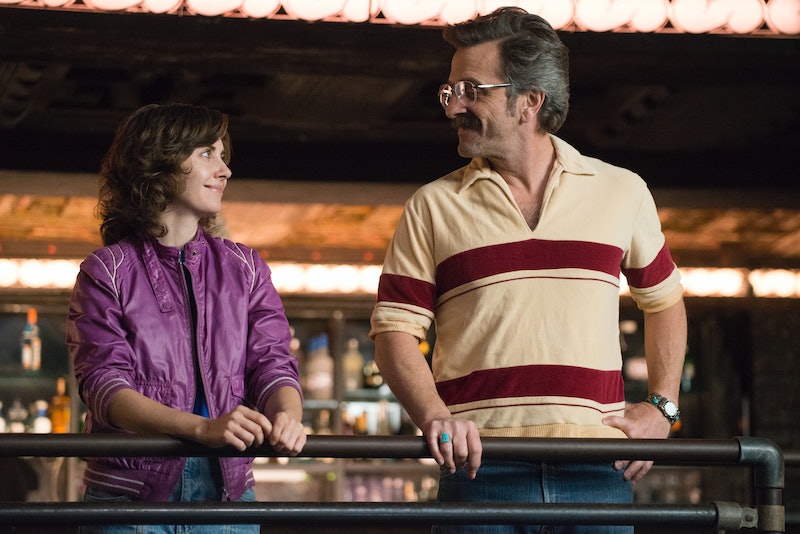 Spoilers for GLOW Season 2 ahead. While life inside the ring on GLOW is melodramatic in its own way, the wrestlers and crew making the '80s series have their own soap opera going on behind the scenes — and that's especially true for a certain director and his lead villain. Will Ruth and Sam get together on GLOW? It's starting to seem like the two tortured artists have feelings for each other.

There are shades of Cheers' Diane — another highly driven, occasionally uptight '80s sitcom lady — in Ruth, but that's not the only reason why her relationship with the grumpy Sam seems to click. Their relationship has its ups and downs, but they've proven they care about each other as much as they care about the show they're making. Season 1 ended with a Broadcast News homage during the final credits, and it's clear Ruth's story in Season 2 owes a debt to the 1987 James L. Brooks rom-com about a talented woman and the two men who fall for her.

At the beginning of the season, Sam punishes Ruth for making an opening credits sequence and temporarily shuts her out of the show. Ruth's talent and determination earn her that screen time back, but her relationship with Sam is somewhat strained — and then a cameraman named Russell comes into the picture. Russell's feeling for Ruth are clear from the start, though Debbie sabotages their first date by making Ruth work late.

In Episode 5, Ruth supports Sam by attending a screening of one of Sam's early horror films, at Justine's invitation. Ruth and Sam bond in the process. Was Justine trying to set them up? She does tell Ruth that Sam seems to hate her less than he hates everyone else. Later in the season, after an injured Ruth has slept over on Sam's couch, the two share a slow dance at Justine's high school, and the tension between them seems to frighten Ruth enough to send her running back to Russell.

GLOW isn't build around a "will they or won't they" romance — while plenty of characters have romantic interests, the central plot is focused on female friendship and the different ways these women are finding themselves through wrestling. Yet even if it's not the point of the show, it's hard to miss the lingering looks Sam and Ruth are tossing lingering in each other's direction.

But there are more obstacles in their way than charming cameramen or the sabotage of a bitter friend. While it could be seen as traditionally romantic how Sam protects Ruth — he drove her to get an abortion in Season 1, and in Season 2, he breaks the windshield of a network executive who attempted to sexually harass Ruth — Sam is also her superior. It's possible to read his care for her as more paternal than anything, especially at this stage. Ruth and Sam would need to be on a more equal playing field in order to make a satisfying romance work. They may well get there eventually, but they aren't there yet.

When Season 2 ends, Ruth is officially with Russell; after flirting for weeks, the two begin hooking up after Ruth gets spooked and leaves the dance. It's rare to see a woman on screen choose the uncomplicated relationship over the more difficult one. This could be another way GLOW goes against convention, but it could also just mean this isn't the end of Ruth's romantic story. In the Season 2 finale, Ruth is off to do Gorgeous Ladies of Wrestling as a live show in Vegas — no cameraman needed. She and Russell are now long distance.

And that means that if GLOW returns for Season 2, fans who want Sam and Ruth to get together have a reason to be hopeful.